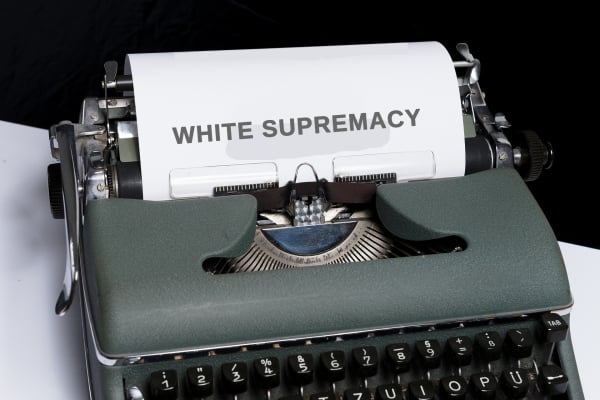 In May 2021, two members of the Family Values, a white supremacist prison gang, allegedly killed a member of the rival Southwest Honkeys prison gang over a longstanding beef. Three months later, a New Jersey man who had vandalized synagogues and distributed neo-Nazi pamphlets strangled his wife.

On the surface, the crimes would appear to have little more in common than their brutality. But the Anti-Defamation League includes these murders by white men of other whites in its tally of right-wing and white supremacist murders in its report, “Murder & Extremism in the United States in 2021.”

“In 2021, white supremacists were responsible for more murders than any other type of extremist; in many years, they comprised an outright majority of the extremist murders that year,” the report said. “Indeed, over the past 10 years, white supremacists have committed 244 (55%) of the 443 killings that the ADL (COE) has documented.”

The ADL also claims that other "right-wing extremists" – including those it describes as "anti-government" and "incel/manosphere" (typically, involuntary celibates or misogynists) – were responsible for another 20% of extremist killings during the 10-year-period (2012-21).

The report has been cited repeatedly in media pieces as evidence of the lethal threat posed by far-right extremists since a mentally disturbed 18-year-old white supremacist murdered 10 African Americans and injured three others at a Buffalo market on May 14. Its stark warning has helped provide a backdrop for the narrative advanced by the White House, advocacy groups, and national media outlets that toxic white nationalism permeates American society. "White supremacy is a poison. It's a poison ... running through our body politic," President Biden said in his speech in Buffalo after the shooting. "… And it's been allowed to grow and fester right before our eyes."

But a closer examination of the statistics compiled by the ADL – which did not respond to multiple requests for comment – casts doubt on their use as evidence that African Americans or any other Americans are under increasing or serious threats from racist white zealots. The report was publicized in a month of back-to-back massacres by mentally disturbed young men, the latest by a member of a heavily Hispanic community in Texas, which suggest mass killings defy such pat analysis.

Critics cite other problems with the ADL report. Like other organizations tracking extremism, the ADL rarely offers context to claims regarding extremist murders by comparing them to broader homicide statistics. During the same 10-year period cited by the ADL in its 2021 report citing 244 murders by white supremacists, there were at least 165,000 murders in the U.S., meaning those the group attributes to white supremacists accounted for .001% of such violent deaths in that decade.

That statistic pales in comparison with those of major cities that have seen shocking increases in bloodshed, with recent annual murder totals breaking or nearing records set in the 20th century. Chicago had 797 murders in 2021, the highest total in 25 years, while much smaller Minneapolis, one year after George Floyd died in police custody there, had 96 murders, one shy of the city’s 1995 record. Huge jumps in murders also occurred in Philadelphia, Los Angeles, and other metropolitan areas.

“The FBI has not issued the official number of murders in the U.S. in 2021, but it is expected to exceed the number of murders in 2020: 21,570 -- of which, according to ADL, 23 were committed by extremists,” Carl Moody, an economist at the College of William & Mary who studies crime, told RealClearInvestigations.

“The data presented by the ADL could also be characterized as follows: the number of murders committed by extremists is very small, only 29 in 2021, of which less than half were committed by white supremacists,” Moody said. “It is also 63% lower than the maximum number (78) in 2016, so extremism is down since 2016. In 2020, according to the CDC, 1080 people were killed falling out of bed. Therefore, you are 47 times more likely to be killed by a bed than by an extremist.”

“It’s important that we get the numbers right and in perspective,” said John Lott, president of the Crime Prevention Research Center. “And we’ve had mainstream narratives that make it sound like they are all like the Buffalo killer. But there are very specific circumstances to a number of these shootings. If there is a significant threat to blacks from these kinds of mass attacks they need to know that. Otherwise, you’re creating divisions that don’t need to be there.”

Crime experts also note that many of the killings cited by the ADL – such as the slaying committed by Shawn Lichtfuss, the New Jersey man who killed his wife, or John Hilt and Justin Murphy, the allegedly lethal members of the Family Values prison gang – were not hate crimes aimed at terrorizing blacks or other minorities.

At the same time, critics say the ADL overstates the percentage of white supremacist murders because it omits some high-profile crimes committed by non-whites. Lott provided eight examples of mass killings – traditionally defined as those with four or more fatalities – excluded by the ADL in its decade-long tally. One of those was the 2016 attack a black man launched against white police officers in Dallas that killed 5 and wounded 11.

The ADL report also does not include the more recent carnage in Waukesha, Wisconsin, last November when a black man with a history of racist social posts drove into a mostly white crowd in a Christmas parade, killing six and injuring 62. For 2021, the ADL lists just two murders by people it classifies as “black nationalists.” If the Waukesha victims were included, black racist murders would account for 23% of extremist murders (8 of 35) for 2021.

"The Wisconsin car attack is one that is very hard to miss," Lott said. "It is such an obvious and well-known case that you have to wonder if they omitted it because it goes against 'their narrative.'"

The ADL’s own report indicates that many of the killings it attributes to white supremacists do not fit common understandings of racist hate crimes. It reports, for example, that 76 of the 244 killings, or 31%, were committed by members, suspected members, or associates of white supremacist prison gangs. They were the deadliest group profiled, and “given the nature of prison gangs as organized crime groups, it is predictable that many of the murders would be related to traditional criminal activities, ranging from drug-related murders to killings committed in robberies.”

Indeed, the ADL admits that the majority of murders it attributes to white supremacists were non-ideological.

“Over the past 10 years, only 86 of the 244 white supremacist killings (35%) were ideological murders,” the report said. “The remainder were group-related but not ideological attacks, were related to traditional criminal activities, or were murders for which no clear motive could be determined.”

That finding tracks with a March 2021 report from Lott’s organization addressing what it called "the false narrative of white supremacists doing mass public shootings." Examining all shootings involving four or more fatalities from 1998 to March 2021, it found in 71% of them  "no mention of political affiliation” of the shooters. The report determined that “4% are right-wingers or conservatives or Republicans, 6% were liberals or Democrats or left-wing, and 10% were Muslim. About 9% are white supremacist, neo-Nazis, or anti-immigrant, but these people come from both the left and the right. Mass public shootings make up a small percentage of murders, and anti-minority mass public shooters are not the biggest threat even in that group."

Brian Levin, who heads the Center for the Study of Hate & Extremism at California State University-San Bernardino, said it can be difficult to pinpoint precise motivations of mass murderers, as "we are seeing less rigid ideological killers who increasingly seem to browse at a buffet of hatreds."

The Buffalo killer’s overwhelming hatred, however, was racist, as he expressed both the belief that blacks are inferior and angst over a kind of global conspiracy called “the great replacement theory,” Levin said.

In his 180-page rant published while he was allegedly opening fire in Buffalo, the extremist described himself at various points as a “mild/moderate left authoritarian,” and he viewed conservatism with contempt as a corporate catspaw.

“In whole or in part, he’s a Nazi,” Levin said. “He hates Jews, he hates blacks - hatred is the primary driver.”

To be sure, targeted racist mass murders invoke a terror that everyday murders do not – massacres such as those by Dylann Roof at an African-American church in Charleston in 2015 (9 dead, one injured); the Pittsburgh Tree of Life synagogue shooting in 2018 (11 dead, 6 injured); the 2019 attack at the El Paso Walmart (23 dead, 23 wounded); as well as the recent attack in Buffalo. When such killers target African Americans, Jews, or others on racist terms, the crimes have a disproportionate impact on how they and all Americans may perceive the atmosphere, Levin said.

“Not all crimes have the same effect on the American psyche,” Levin said. “I’ll leave it to others to talk about how the media covers it, but when Tony Soprano knocks off another criminal family wiseguy it does not have the kind of impact these manifesto mass killers do.”

Levin said his research supports the idea that right-wing extremists are a huge threat and he pointed to other studies that have drawn the same conclusion.

Nevertheless, critics say the evidence indicates that the emphasis the White House and media outlets have thrown on the threat posed by white supremacist killings is misleading.

“Death by extremist is an incredibly rare event,” said Moody, the William & Mary economist. “It is absurd to try to generalize from such tiny numbers.”