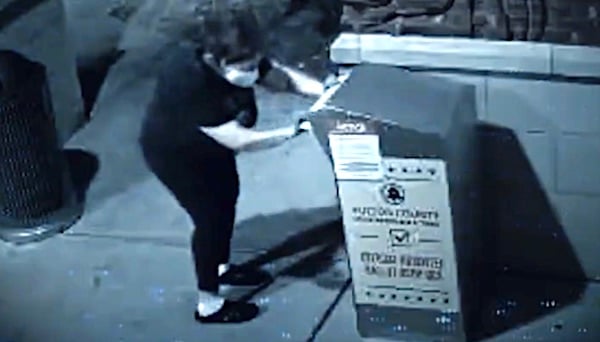 Feeling a bit like Charlie Brown and the elusive football, many who voted for Donald Trump in 2020 have grown weary of claims of evidence that the 2020 election was stolen.

Filmmaker and author Dinesh D'Souza understands that reaction, but he's willing to bet that even the most cynical among us will be convinced after seeing the hard evidence presented in "2000 Mules," which is debuting this week.

"This idea that this was the most secure election – I predict that this movie will blow that out of the water," he told WND in a video interview (embedded below).

"No one who sees this movie will be able to listen to that with a straight face."

D'Souza emphasized "this is evidence of a completely different caliber than anything we've seen before."

The evidence comes from a lengthy investigation led by True the Vote founder Catherine Engelbrecht and data analyst and election intelligence expert Gregg Phillips based on cell phone location data, surveillance video and whistleblower testimony. As Engelbrecht told WND in an interview last week, through a tedious process of combing through two petabytes of data they uncovered a highly coordinated operation in key battleground states carried out by left-wing groups that collected mail-in ballots and paid "mules" to stuff them in unattended drop boxes, typically in the middle of the night.

D'Souza told WND that viewers will laugh at the claim that the 2020 election was the most secure ever because they will have seen "video upon video upon video" of illegal ballot trafficking.

"And when you look at the mules, their behavior is inherently suspicious," he said.

"I mean these are guys wearing gloves. They look to the left and the right to make sure they’re not being seen. They take photos of the ballots going in so they can get paid," said D'Souza.

"It's these little details watching this movie that convince you that you are actually watching a criminal operation being executed."

The film was shown in theaters across the nation on Monday, and there's another theater showing Wednesday night prior to a livestreamed event in Las Vegas on Saturday in which a showing of the film is followed by a Q&A with D'Souza, Engelbrecht and Phillips, as well as Salem network radio hosts Larry Elder, Eric Metaxas and Sebastian Gorka. After that the film will be available for streaming on a new Rumble platform called Locals.

'This is going to be a smoking gun'
The first part of the movie, produced by Salem Media Group, features Salem hosts who, according to D'Souza, had not seen the evidence compiled by True the Vote when they were filmed.

Dennis Prager and Larry Elder, in particular, express skepticism that any evidence had emerged that could move the needle on the political and media establishment narrative of the 2020 election.

In the second act, they're shown the evidence, and the third act features their spontaneous reaction.

"This is going to be a smoking gun," Elder said. "This is O.J. Simpson being seen leaving the scene of the crime.

"How do you explain it?" he asked.

Last week, Georgia state investigators who responded to a complaint by True the Vote issued subpoenas that signal they are engaged in a wide-ranging probe into the alleged ballot trafficking, Just the News reported.