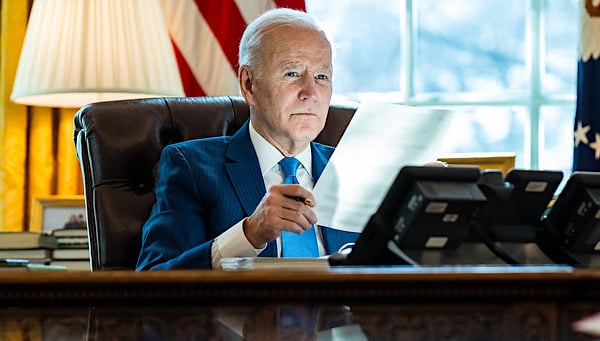 The famed reformer in the field of psychiatry who is spotlighting the Biden administration's "stealth" move to give the World Health Organization's chief unilateral power to declare health emergencies in the United States contends the U.S. effectively is ceding its sovereignty to the Communist Party government in Beijing.

In an in-depth 70-minute video interview with WND (embedded below), Dr. Peter Breggin discusses the startling implications for the future of the American experiment in the Biden administration's International Health Regulations amendments. The proposed regulations will be subject to votes at the upcoming annual meeting of the WHO's governing legislative body, the World Health Assembly, May 22-28 in Geneva, Switzerland.

The current WHO director-general, Tedros Adhanom Ghebreyesus, Breggin explained, already has demonstrated what it would look like if he were given more power, having collaborated with Beijing in covering up the origin of the COVID-19 pandemic and agreeing with the regime during the early stages that the virus wasn't dangerous.

"The U.S. is the one power that stands in the way of globalism," Breggin said.

Many Americans, he said, hold to a Judeo-Christian tradition that believes "God doesn't intend for us to be run by the communist Chinese or Bill Gates or any of these Western or Eastern predators."

A graduate of Harvard and Case Western Reserve Medical School, Breggin, 86, is known as the "conscience of psychiatry" for the many reforms he has brought to the field, including stopping the use of lobotomies and electroconvulsive therapy along with harmful drug therapies. His latest book is "COVID-19 and the Global Predators: We are the Prey," which unpacks the web of organizations and people profiting from the pandemic.

Breggin said the response from Congress to the recent revelation of the Biden administration's WHO amendments has been slow. But he and his team are beginning to reach out directly, noting he was on the phone earlier Tuesday with congressional staff.

"It looks like this could be a firestorm," he said.

Breggin also is in conversations with state attorneys general.

"I'm hoping attorneys general will see the threat to their own states' rights," he said, "because Biden isn't going to see a threat to anybody's rights.

He urges concerned citizens to find out more on his website and to contact their representatives, emphasizing that phone calls tend to be the most effective means of communication.

WHO's long-term goal, he warned, is to establish treaties between nations would be binding under international law. That prospect, he affirmed, underscores the importance of electing members of Congress this fall who understand WHO's objectives and the implications for American sovereignty.

Among many other related topics, Breggin discusses with WND the current significance of an organization Bill Gates set up with Klaus Schwab to manage global vaccination campaigns.

'That was just a warmup'
Breggin said his experience as a reformer in psychiatry – working with the establishment and facing scorching criticism from the scientific community and from drug companies – prepared him for this moment.

He recalled his wife, Ginger, who has partnered with him in his reform work for decades, saying as the pandemic developed: "You know, honey, I thought that God put me here to help you be the conscience of psychiatry. I think that was just a warmup. He wants us to join the freedom fight for America."

Then came endorsements from "these wonderful docs," such as leading pandemic-response critic Dr. Peter McCullough, Breggin said, "and we had a whole new world."

"This has been such an experience for us," he reflected. "We went from fear, and terror, and other various emotions, to thanking God, at our age ... for a second life.

"We've met incredible people all over the world," he said.

Most are "conservative Christians," Breggin said, noting he comes from a "progressive Jewish" background.

Breggin said a "refounding of America" is the "only hope for the earth."