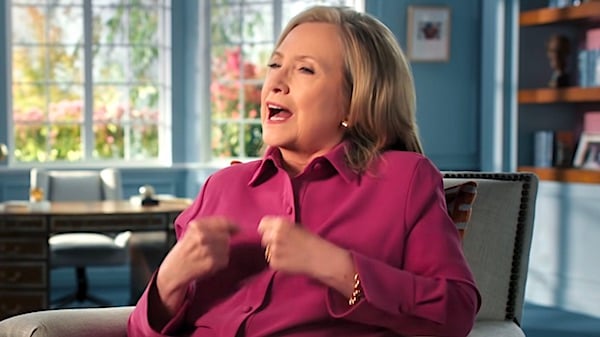 In what could become a harbinger of the 2022 and even 2024 elections, the first trial has gotten under way in special counsel John Durham's three-year investigation of how the Democrats launched their now-debunked "Russia collusion" conspiracy theory against Donald Trump before the 2016 election.

What is known is that it apparently was begun by the Hillary Clinton camp in order to distract voters from her very public email scandal, and that officials up to and including Barack Obama were briefed on her plan to claim that Trump, then a candidate, was somehow linked to Russia.

It was debunked long ago, and now Durham is investigating, among other things, how faked evidenced was used by the FBI to obtain permission from a federal court to spy on the Trump campaign.

The trial is for Michael Sussmann, a longtime Clinton campaign lawyer who presented  "evidence" about Trump to the FBI purportedly as a private and concerned citizen.

However, Durham's evidence suggests he was on Clinton's payroll at the time, and that is the charge: lying to the FBI that he was not presenting his claims on behalf of a client.

The New York Post cited Tom Fitton, president of government watchdog Judicial Watch, saying, "If Sussmann, one of Hillary Clinton’s top campaign lawyers, is convicted, it will further confirm that Trump is a crime victim."

He added, of 2024, "I would expect him to continue to say that [the government] illegally spied on him and that Hillary did it. And if Clinton runs, this anti-corruption message is even more likely to be front and center."

Will Hillary Clinton ever face criminal charges for her role in the Trump-Russia collusion hoax?
44% (27 Votes)
56% (34 Votes)

Last year, the first defendant charged by Durham, ex-FBI lawyer Kevin Clinesmith, was given a year of probation after confessing he doctored an email to obtain a wiretap against a Trump campaign adviser.

The Post reported, "Sussmann allegedly misled a top-fed by claiming he wasn't 'acting on behalf of any client' when he handed over three 'white papers' and two thumb drives that purportedly pointed to a secret backchannel between a Trump Organization computer server and Russia’s Alfa Bank, now under U.S. sanctions tied to the invasion of Ukraine."

Clinton at the time was making similar public claims, stating on social media, "It’s time for Trump to answer serious questions about his ties to Russia."

Leftist media picked up on the claims and amplified them, apparently without documenting whether there were any ties.

Because an FBI investigation actually found there were no links.

Durham's charge alleges Sussmann fed the FBI information as a result of efforts by one of his clients, tech executive Rodney Joffe, to "exploit" his industry connections to "create a 'narrative' regarding Trump," the report said.

Durham also has raised questions about a "bias" against Trump that researchers who were connected to Joffe exhibited.

One of them admitted, "The only thing that drives us at this point is that we just do not like [Trump]. This will not fly in eyes of public scrutiny. Folks, I am afraid we have tunnel vision."

"According to his indictment, one of the 'white papers' was drafted by the research firm Fusion GPS, which hired former British spy Christopher Steele to compile the largely discredited 'Steele dossier' against Trump," the report said, citing the debunked work by Steele.

Just weeks ago the Federal Election Commission fined both the Clinton campaign and the Democratic National Committee for hiding payments made to Fusion GPS for opposition research as legal payments on official forms.

Durham has called the operations a "joint venture" involving Sussmann, Joffe and the Clinton campaign to "to gather and disseminate purportedly derogatory internet data" targeting Trump.

Christopher Cooper, the judge in the case, got his job from Obama, and already has issued several rulings limiting Durham's evidence and arguments.

The Washington Times noted that as court proceedings got under way, about a quarter of the potential jurors in the hugely Democrat Washington confirmed they either had donated to Hillary Clinton's campaign or had strong opinions about the election that Trump won.

The court has scheduled two weeks for the trial.