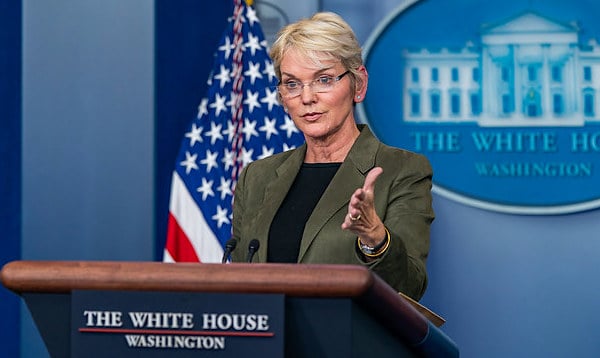 Energy Secretary Jennifer Granholm said President Joe Biden is “obsessed” with the issue of high gasoline prices, but said he has limited power to lower prices.

“He’s obsessed with the fact that gas prices are so high and people are hurting,” Granholm told CNN Tuesday during a trip to Louisiana.

The average price of gasoline in the U.S. reached an all-time record of $4.60 a gallon Thursday, up more than 92% since January 2021 when Biden took office, federal energy data showed. Granholm added that Biden had limited options when it came to lowering prices for consumers.

“The president doesn’t control the price,” the energy secretary added, according to CNN.

The Biden administration, meanwhile, has declared a war on fossil fuels, canceling all of the nation’s remaining offshore oil and gas lease sales and implementing tight restrictions on future onshore lease sales.

“This is becoming a pattern – the administration talks about the need for more supply and acts to restrict it,” Frank Macchiarola, the American Petroleum Institute’s senior vice president of policy, economics and regulatory affairs, said in a statement following the administration’s May 11 decision to cancel three offshore lease sales.

Granholm’s remarks Tuesday came following a tour of a federal Strategic Petroleum Reserve (SPR) facility in Bayou Choctaw, Louisiana. While she suggested he has limited power over pump prices, Biden has ordered three separate SPR releases as pump prices have surged over the last six months, the latest of which he promised would lower prices by up to 35 cents a gallon.

Biden has also attempted to lower prices by making biofuels more available and turning to Venezuela’s authoritarian government for greater oil production. Biden has also implored Middle Eastern producers to boost production, a request that has repeatedly been ignored.

The Department of Energy and White House didn’t immediately respond to requests for comment from The Daily Caller News Foundation.

WND News Services
These reports are produced by another news agency, and the editors of WND believe you'll find it of interest.
Up to 150 gallons of tahini sesame oil spills onto road
City apologizes to homeless for trauma caused by street cleanings
Giant sunspot currently facing earth
How to shut the 'Gates of Hell'
Dems propose trashing Supreme Court because of its rulings
See more...

City apologizes to homeless for trauma caused by street cleanings