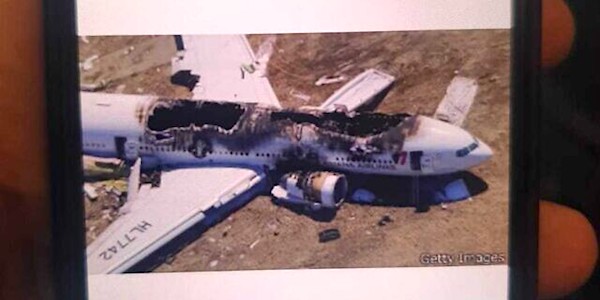 A photo of Asiana Airlines Flight 214, one of several plane crash photos sent to passengers on a flight from Israel to Turkey that was delayed on May 10, 2022. (Israel Airports Authority)

(TIMES OF ISRAEL) -- A flight to Turkey from Ben Gurion Airport returned to the terminal from the runway on Tuesday after several passengers found photos of plane crashes had been sent to their cellphones.

The incident occurred as the plane was taxiing for takeoff, according to a statement issued by the Israel Airports Authority (IAA).

Later on Tuesday, the IAA said several passengers had been involved in sending out the photos. Police later said nine passengers were arrested.