Delays are up. Cancellations, too.

Why? Because of the pilot shortage.

A pilot shortage? How can this be? Flying is a popular job. Some people fly small planes just for fun. Why aren't there enough commercial pilots?

Because the government passed another dumb law.

In 2009, after a Colgan Air crash near Buffalo, New York, killed 50 people, Congress decided that airlines could only hire aspiring commercial pilots who already had lots of flight time.

"That never made any sense," says current commercial airline pilot Tracy Price in my new video.

The sixfold increase wouldn't have prevented the Colgan crash. Those pilots had many more than 1,500 hours of flight time. The pilot had 3,379 – the co-pilot, 2,244.

Demanding more pre-hire flight time discouraged people from trying to become pilots. It had "the effect of pulling up the ladder," says Price.

Few people have the time or money to get 1,500 hours in the air before they can even apply for a job. The number of certified pilots fell even as flight demand increased.

I say to Price, "This rule is good for you!"

"Great for me (and other) professional pilots," he replies. "If you believe in freedom though, it's a bit of an issue."

"(But) there was no shortage of applicants!" Price responds. "Plenty of people were willing to take fairly low pay and live with roommates for a year or two to gain that really valuable jet experience."

In fact, those hours may leave pilots less prepared. "Flight time does not equal experience," Faye Black of the Regional Airline Association told Congress. "We waste a lot of time in training, breaking bad habits pilots acquire while trying to quickly get to 1,500 hours."

The politicians ignored her.

The last fatal commercial airline crash was 13 years ago. Flying is much safer than driving, biking, and taking a bus or train.

"Safer than any mode of conveyance ever, including walking," says Price.

But politicians believe that if they're not passing more rules, they're not doing their job.

"I spend a lot more time than I want to making announcements to people apologizing for being late," says Price. "We should be looking for ways to expand the availability of airline travel to more people so more people can take advantage of this amazingly safe way to get from A to B." 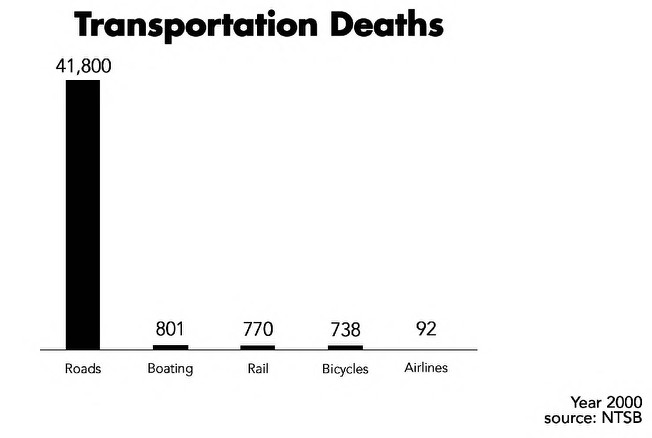 John Stossel
John Stossel is author of "Give Me a Break: How I Exposed Hucksters, Cheats, and Scam Artists and Became the Scourge of the Liberal Media." To find out more about John Stossel, visit the Creators Syndicate webpage.
Pro-choice vs. pro-life: A libertarian weighs conflicting rights
Today it's the left that has trouble laughing
Rent control HURTS renters
Biden's deceitful brag about the deficit
Formula shelves still empty thanks to government rules
See more...