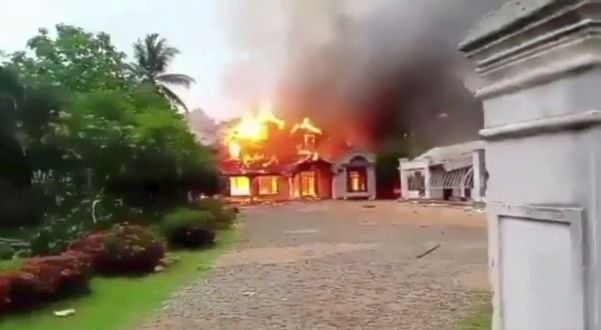 Politician's home burns in Sri Lanka due to food riots, May 2022 (video screenshot)

(ZEROHEDGE) – Two months ago, we noted the first Arab Spring 2.0 incident when, as a result of soaring food, energy (and everything else) prices, thousands of angry Iraqis took to the street to protest. Needless to say, their complaints did not get much traction, and in the meantime food prices have only exploded to fresh record highs, far surpassing the levels hit in 2011 when riots against, you guessed it, food prices toppled most MENA political regimes (not without some CIA backing).

And as food prices keep rising, the protests across poor nations keep escalating, and on Thursday protests broke out in Iran leading to at least 22 arrests, after the government cut subsidies for food, sending prices through the roof as authorities braced for more unrest in the following weeks, Fox News reports.

In videos shared on social media, protesters can be seen marching through Dezful and Mahshahr in the southwestern province of Khezestan, chanting “Death to Khamenei! Death to Raisi!” referring to Iranian President Ebrahim Raisi has promised to create jobs, lift sanctions, and rescue the economy.