Should people be tracked and put in prison for spreading what the powers that be deem as "misinformation"?

A former reporter for the Fox News Channel thinks it might be time for that.

Carl Cameron, the former chief political correspondent at Fox News, made the stunning remark during an interview Tuesday with MSNBC host Nicolle Wallace, as the topic centered on the political ideology of mass shooters. 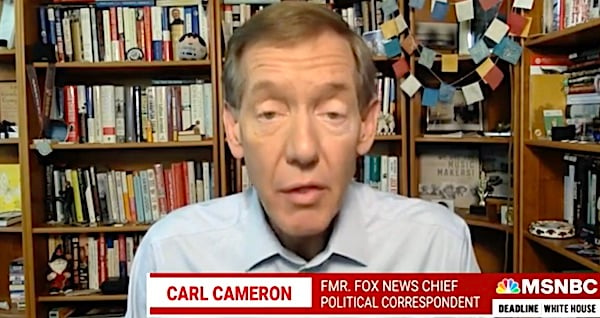 "What happens at Fox News when something like this happens?" Wallace asked Cameron.

"I can't even imagine. It's partly why I ended up gettin' out of there," Cameron responded.

"It really is kind of horrible to think that journalists with national and international capacity are putting together this type of nonsense.

"I think the president did a great job. I wish he had done a lot of this a lot sooner, and we need a lot more from the left and the middle, and we got to watch out because the Republicans have become the purveyors of misinformation, and when our two-party system is broken like that, democracy is seriously in trouble.

"The president acknowledged that it's time to actually start doing things and maybe taking some names and putting people in jail."