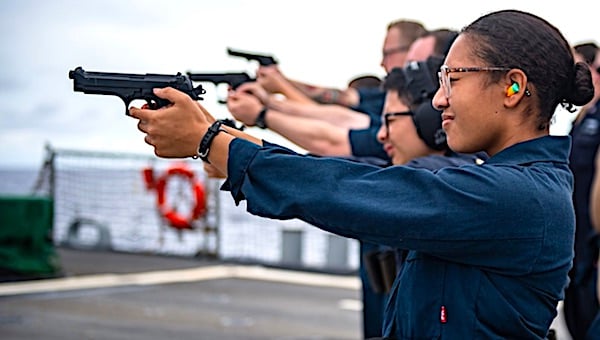 A former Marine is calling for the restoration of public executions in the United States because the purpose of government is to protect "life and property."

"Not providing school lunches, not fighting 'hate,' not ending poverty – protection. A state that does not protect its citizens from enemies foreign and domestic will cease to exist," writes Josiah Lippincott in American Greatness.

He explains he's already been permanently banned from Twitter for criticizing the Biden regime.

He said in America right now crime is out of control. "Murders are up 40 percent since 2019 in America’s big cities. Violent assault is up 12 percent. Last November alone saw 3,000 car break-ins in San Francisco – a massive rise from the year prior."

Criminal justice reform is required, he wrote. And the first good place to start, he said, would be "with public executions of the most vicious and bloodthirsty convicted criminals in our midst."

"Peel away the interminable blather – that ocean of words, processes, and legal jargon that permeate our lives – and the true purpose of the state becomes clear: protecting life and property." It is to that purpose that the state possesses the power of life and death domestically, through punishment for crime.

He said, "Politicians and ordinary people alike need a firm and striking reminder of what government is actually supposed to do. That is why we need to start executing criminals in public. Every town square in every little town in America should have a gallows—a stark reminder of the power of the state to enforce order and decency. As a country, we need a heavy dose of reality to counteract the soporific effect of endless propaganda and life in the virtual world."

He said a beginning of the solution would be to make murderers, drug dealers and rapists afraid again.

"Pain and fear are powerful incentives. Decent and patriotic Americans need to learn to use these weapons in the name of preserving a civilized way of life," he said. "Letting vicious killers and thugs run amuck is not humane. It isn’t kind. It is certainly not Christian. The biblical God is a God of justice. It was Christ himself who said in Matthew 18:6 that he who corrupts children deserves to be cast into deep waters with a millstone around his neck. This is a Sunday school lesson more pedophiles need to learn firsthand."

He said such penalties are "to discourage others from committing particularly horrific crimes."

"Killing a pedophile won’t undo the rapes he has committed. It most certainly can, however, serve as a stark reminder to others not to abuse children," he said. "Most criminals have lower than average intelligence and poor impulse control. But even they can grasp basic self-interest if they have help. Public punishment is that aid. But executions only have a deterrent effect when there is a clear connection between the crime and the punishment."

He cited the last public execution in America as an object lesson. It was on June 7, 1936, that a man named Rainey Bethea brutally raped and murdered an elderly woman by the name of Lischia Edwards in Owensboro, Kentucky.

The criminal left fingerprints at the crime scene, left his ring, with his name on it, behind, confessed to the crime, twice, revealed where he hid the stolen items, which were found where he said, and more.

A jury deliberated three hours before condemning him to death by hanging.

Judges in the case "respected the will of the jury" and two months and a day after his crime, he was hanged in front of a crowd of 20,000.

But today, he wrote, 18 years is an average time served on death row.

He concluded, "Trials should be swift and the punishments themselves should be carried out quickly so that the connection between crime and its consequences is not lost. Juries, not lawyers, should be at the center of our legal system. America needs a moral reckoning. Instead of the slow torture of solitary confinement and life sentences, our justice system should utilize our fear of intense, but swift, pain to deter the worst criminal elements.

"Flogging and public executions are superior and more moral deterrents than the lives lived by prisoners in America’s harshest penitentiaries."

"Public executions are a necessary kind of harshness. We cannot have civilization without violence and pain. Human beings possess a natural inclination toward brutality and viciousness. This impulse cannot be eradicated, but it can be tempered. The question is not whether we will have punishment but what kind."