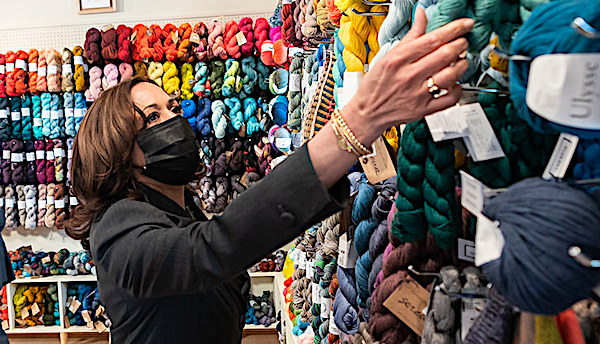 Kamala Harris, a "bought-and-paid-for ally of the abortion industry," is facing a legal complaint that accuses her of colluding with Planned Parenthood to bring felony charges against an undercover journalist who revealed the for-profit motive of America's abortion industry.

Officials with the Thomas More Society, a legal team, said Planned Parenthood also is being sued by David Daleiden, the journalist who in 2015 released more than a dozen undercover videos of abortionists talking about the money they wanted – and the money they got for selling the parts of unborn babies.

One abortion infamously said she wanted to get higher payments for unborn baby body parts because, "I want a Lamborghini."

After the videos appeared, Planned Parenthood sued, and won a judgment after the judge, a supporter of Planned Parenthood who refused to let an impartial judge handle the case, directed the jury to find for the abortion industry giant.

That case remains on appeal.

But Daleiden also was accused by the state of California of criminal counts – even though his methods were the same as countless other undercover journalism scoops in the state that did not attracted charges.

"Harris, then California's Attorney General, colluded with Planned Parenthood to file felony charges against David," the organization reported. "Kamala Harris even ordered the California Department of Justice to raid David's home and confiscate his unpublished videos."

The society said, "I won't sugarcoat it. If not cleared of these charges, David faces steep fines and years in state penitentiary and the consequences of being a convicted felon. While Kamala Harris --- a bought-and-paid-for ally of the abortion industry --- is sitting one heartbeat away from the presidency."

The action now includes a federal civil rights lawsuit in California against Harris "for prosecuting David in bad faith, twisting and perverting California's anti-eavesdropping law to persecute a citizen journalist because of his political views."

A defamation/libel claim also has been filed in New York against Planned Parenthood over its public statements that Daleiden created "fake" information.

The case has been ongoing for years already, but WND reported just last year that Judge William Orrick, who helped fund a Planned Parenthood business at a "resource" center where he was on the board, ruled that certain videos taken by undercover journalists investigating the baby-body-parts-for-sale schemes in the nation's abortion industry never can be revealed.

The Federalist previously noted Orrick, who got his job from the radically pro-abortion Barack Obama, issued the order.

"Both Orrick and his wife are longtime donors to San Francisco’s Good Samaritan Family Resource Center (GSFRC), where Orrick was a board member and helped fund and open a Planned Parenthood clinic on its site. That clinic sold fetal tissue to StemExpress, a for-profit wholesaler exposed by CMP’s videos and reporting," The Federalist reported.

Orrick's order came in the National Abortion Federation case against David Daleiden, one of multiple cases that came out of the undercover reporting done by the Center for Medical Progress.

Courthouse News reported the decision followed a $2 million civil verdict in favor of Planned Parenthood against Daleiden, fellow activist Sandra Merritt, his anti-abortion group the Center for Medical Progress and others.

Orrick ruled in favor of abortionists at every step of the case, despite the fact that profiting from the sale of baby body parts is illegal under federal law.

One of the videos in dispute was briefly available online before Orrick ordered it taken down and threatened anyone who possessed a copy. Even news outlets not party to the case were barred from posting it.

WND, however, transcribed for its readers the comments of the abortion executives.