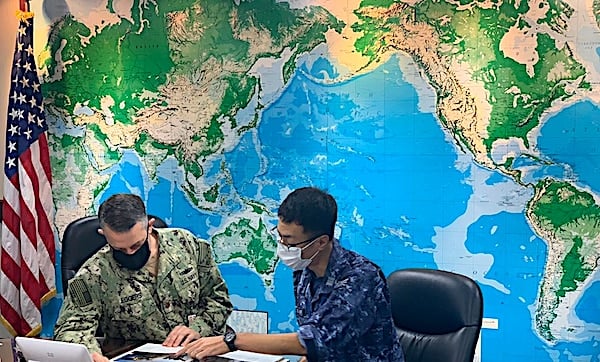 Audio recorded during an alleged May 14 Chinese military planning session seemingly revealing China’s invasion plans for Taiwan could be misinformation, according to multiple experts.

While Zeng told TheDCNF she could not independently verify if the audio was authentic, she said after analyzing the clip, the names and locations matched public records.

“In that audio they mentioned quite a few names of factories, trains, companies. I checked all the names that they mentioned in the audio and matched them with the public record and they all match,” Zeng said. “A factory they mentioned really produced drones and that sort of machinery. They knew what they were talking about.”

However, a former senior Trump administration official, who is not authorized to speak to the press in an official capacity, told TheDCNF that the audio was “meant to intimidate.”

“[An invasion] would not be in Guangdong, it would be somewhere close to Fujian and Zhejiang provinces,” the official said. “A Taiwan invasion, pre-kinetic preparation, would be much, much larger in scale and we would have known.”

Steve Yates, chair of the China Policy Initiative, told TheDCNF that it was “extremely unlikely” the video was an unauthorized leak, noting that Chinese authorities would “follow up” with the leaker.

“So we have to assume this content was meant to influence as much as inform,” Yates said. “The CCP is now saying the quiet part out loud. The challenge for the U.S. and allies is that there is no way to discern between exercises meant to influence versus actual mobilization to attack.”

The alleged leak records a “war mobilization meeting” of the “Military-Civilian Joint Command in Guangdong Province” discussing the construction of a “national defense mobilization command system” and how China would conduct wartime preparation, according to Zeng’s YouTube video analyzing the audio. China’s alleged Taiwan invasion plans reportedly call for 140,000 personnel and 953 ships of various types, Zeng reported, and also addresses how to mobilize overseas Chinese and suppress possible social unrest.

The alleged leaked audio follows President Joe Biden’s recent visit to Asia and comes only weeks after China conducted a “rehearsal” for a Taiwan invasion between May 6-8.

Zeng said China is clearly in the process of decoupling from the West, citing the Chinese government forcing companies like Didi Chuxing to delist from the New York Stock Exchange. She also pointed to Xi Jinping’s stated goal of achieving “internal circulation of the economy” and China’s efforts to buy up crops from overseas as well as the recent “insane lockdown order” in Shanghai as evidence of China’s intention to decouple.

The Department of Defense and Navy did not respond immediately to TheDCNF’s request for comment.