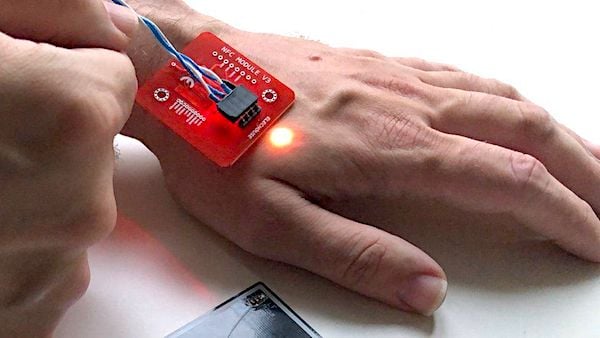 A chip under the skin of the hand illuminates when in close contact with a payment machine. (Photo courtesy Patrick Paumen)

There's a "new technology" story just about every day these days. From self-driving cars and new weaponry that is appearing in the Russian war against Ukraine, from the government tracking people through their cell phones to various streaming, and subscription, "entertainment" options through computers, someone always has something new.

BBC News, in fact, recently documented a process that lets you "pay with your hand."

The report profiles Patrick Paumen, who has had a computer chip implanted in his hand that contains computer code similar to that in a debit-card system that allows him to swipe his hand over a contactless reader, and the necessary funds are debited from his bank account and transferred to the retailer.

The report notes how the first microchip was implanted into a human in 1998, and the British-Polish company Walletmor now is cashing in on the idea.

"The implant can be used to pay for a drink on the beach in Rio, a coffee in New York, a haircut in Paris – or at your local grocery store. It can be used wherever contactless payments are accepted," said chief executive Wojtek Paprota.

The report cites the implant process and surveys people to see who would consider it, It also talks about the computer systems required, and even has a mention that the process does offer some threat to personal information being hacked.

However, nowhere in the report is that the Bible predicted such of scenario some 2,000 years ago.

WND had reported only weeks earlier on a viral video by noted Christian evangelist Ray Comfort who talked about the possible near-term manifestation of the biblical "mark of the beast."

"It's one thing to read the Scriptures and know the prophecies that have already taken place," wrote one online commenter, reacting to Comfort's video on the issue. "But to see them unfold before your eyes gives me chills up my spine. Kind of an excitement as well because I know the end results and who wins."

That famous prophecy in the last book of the Bible suggests that ultimately, everyone on earth will be required to receive a "mark" on their right hand or their forehead in order to buy or sell.

"He required everyone—small and great, rich and poor, free and slave—to be given a mark on the right hand or on the forehead. And no one could buy or sell anything without that mark, which was either the name of the beast or the number representing his name" (Revelation 13:16-17 NLT).

It's one of the Bible's pronouncements that has caused uncountable hours of discussion and angst among theologians and Christians in general.

In the video, Comfort, of Living Waters Ministries -- where he posts Living Waters Podcasts, runs Ambassadors' Academy, the School of Biblical Evangelism, and more, and addresses cutting edge topics such as what the Bible says about transgenderism – explains "the mark of the beast" and the progression of events, starting with the ongoing COVID-19 pandemic, that he believes may well lead to its implementation.

Comfort, also an author whose books include "Nothing Create Everything" and "God Doesn't Believe in Atheists," pointed out that when he first studied the Bible, decades back, technology didn't exist to do exactly what the Bible predicts in Revelation.

Now it does, and he reports on various programs where people can – and do – have programmable chips embedded in their hands today, allowing them to "buy and sell."

His video has been seen hundreds of thousands of times.

"The reactions have been wonderful. The undeniable prophecies of the Bible establish the inspiration of Scripture," Comfort told WND at the time. "Only God knows the future. Not even weather forecasters know what’s going to happen tomorrow. Many a parade has been rained upon because they didn’t get it right.

"But God always gets it right, and that fact shows the fingerprint of God all over His Word. The Living Waters YouTube channel has just passed 185 million views! In these dark days this medium is such a wonderful opportunity to get the ultimate message of hope to millions across the world."

In the video, he points out the fact that some computer chipping companies have chosen the back of the right hand in which to embed their tech, the very location predicted in the Bible.

And what about the demand that people participate?

Just think of what already has happened regarding government demands for COVID vaccination records and such, the video explains.

Is that scenario a part of the "mark of the beast?" "Time will tell," he explains.

The BBC documented that the Walletmor chip "weighs less than a gram and is little bigger than a grain of rice [and] is comprised of a tiny microchip and an antenna encased in a biopolymer - a naturally sourced material, similar to plastic."

Bob Unruh
Bob Unruh joined WND in 2006 after nearly three decades with the Associated Press, as well as several Upper Midwest newspapers, where he covered everything from legislative battles and sports to tornadoes and homicidal survivalists. He is also a photographer whose scenic work has been used commercially.
You're 'only a state, not a god': Officials push Christians to support sin
Media damage by reporting on Russiagate lies remains, '3 years on'
China is 'inside every major American university,' warns Mike Pompeo
'Fake Catholicism': U.S. bishop destroys Biden for massive deception
Kari Lake reveals 'illegally counted' ballots, Dems demand felony charge
See more...