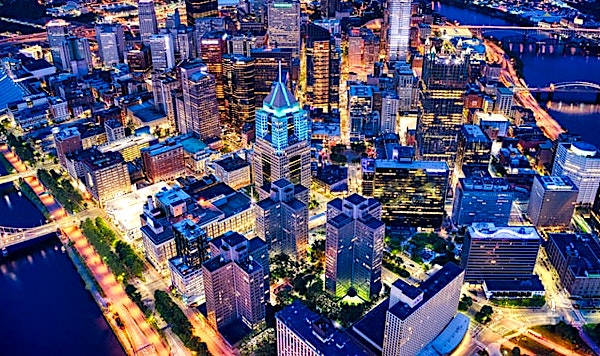 Amid the fallout from a recent mass shooting in Pittsburgh that left two teenagers dead and at least 11 people with gunshot wounds, the attention of Pennsylvanians turns to a crime wave that shows no sign of letting up.

Allegheny County’s homicide spike has led to protests among residents. On top of last month’s shooting, with no perpetrator in custody, there have already been at least 38 killings this year. Last year saw 123 homicides, 10 more than in 2020 and roughly 26 more than in 2019. Meanwhile, on the southeast side of the state, Philadelphia recorded its deadliest year ever in 2021, with 562 homicide victims, according to the city’s police department.

First-year Democratic mayor Ed Gainey, who ran on racial equity and reallocating police resources while avoiding the term “defunding,” is nowhere to be seen, according to the Pittsburgh Post-Gazette editorial board, “even when the city most needed to see and hear him.”

Sam DeMarco, an at-large member of the Allegheny County Council and chair of the county’s Republican Committee, told me Gainey has not addressed surging crime. DeMarco claims that while the mayor “says the right things,” he is not taking action to back the police and protect residents. Many Pennsylvanians are demanding law and order.

“I’d be looking for ways to fund more police officers,” DeMarco said in an interview. “I’d be reinstituting an impact squad, which formerly existed in the Pittsburgh Bureau of Police and was very effective at getting guns and drugs off the streets. I’d be working with the U.S. Attorney’s Office.”

“Mayor Gainey has the opportunity to lead by telling the black community that the police are not their enemy,” he added.

Pennsylvania Democrats, including Gainey, have sought to ban semi-automatic rifles as shootings soar. Two months after being elected, Gainey told residents to “look in the mirror” if they wish to address the homicide surge, while many think his administration should do exactly this.

The mayor’s office did not respond to a request for comment.

Rising crime in Pittsburgh has coincided with a progressive push to end cash bail. State Rep. Summer Lee, a Pittsburgh Democrat, claimed last year that the bail process “leads to lengthy periods of imprisonment” and “centers on an individual’s ability to pay rather than the individual’s risk to public safety.” Left-wing organizations, including the statewide prison group Straight Ahead, endorsed eight judges in 2021 who signaled that they would reduce cash bail. Five were elected.

According to Nick Gerace, a retired Philadelphia police officer who runs the political action committee Protect our Police, ending cash bail has already proved a disaster in New York.

In just the first two months of 2020, 482 people arrested on charges where cash bail wasn’t allowed in New York later committed 846 crimes, a police report showed. Democrats in the deep-blue state are now walking back their prior bail reform, Politico reported in April.

“This is what happens,” Gerace told me. “Criminals are criminals. It doesn’t take a genius or an expert on law enforcement to realize that if you put violent criminals back on the streets this easily, without even a smack on the wrist, they’re going to commit more crimes. Just look at the numbers.”

The lurch toward ending or reducing cash bail and demanding “diversionary programs” framed as alternatives to incarceration – as crime overwhelms the city – comes at a time when Pittsburgh arguably resembles a ghost town.

The office vacancy rate sat at 20.8% at the end of 2021, according to the Pittsburgh Post-Gazette. That’s a 300% increase from the 2013 vacancy rate for class A office space in the central business district, which was 5.2%, according to a February report by the Allegheny Institute for Public Policy, a conservative think tank.

Even as public life opens up amid falling rates of coronavirus transmission, according to Allegheny County data, it is unclear whether some who elected to work from home during Covid-19 will want to return to in-person work as crime rocks the city.

Former Democratic mayor Bill Peduto bears much blame for the crime wave, Rich Cupka, a longtime Pittsburgh native who owns the bar Cupka’s Cafe 2 in the South Side, told me. The South Side, a popular area for young people and barhopping, has seen some of the worst crime.

A 160-year-old building on the South Side’s rowdy East Carson street that housed a welcome center operated by the neighborhood chamber of commerce, a barbershop, and apartments, was burned down in February of last year. Children at a football practice watched in July as a man was shot and killed in the South Side Slopes. Two months later, the University of Pittsburgh cautioned students about “violent crime” in the South Side and told them to avoid “participating in nightlife activities in that neighborhood.”

“I have three friends in the last, say, two weeks that said they’re moving just because they’re tired of hearing all the bullsh-t,” said Cupka. “The shootings don’t get reported unless someone dies.”

Peduto, who served out his second term in January, slashed the police budget by $5.3 million in early 2021. Shortly thereafter, amid a reported 90% spike in violence compared to a year prior, Pittsburgh officials and community leaders gathered in the city’s North Side to urge residents to help reduce crime.

Cupka also pointed to the low rate of murders being solved. A spokesperson for the Pittsburgh police told me there is currently a clearance rate of roughly 26% for the 23 homicides year-to-date – which does not include the others in broader Allegheny County.

The spokesperson did not comment on whether the department thinks it has enough resources for substantive action to ensure public safety.

Gabe Kaminsky is an incoming fellow at The Daily Caller News Foundation. He formerly wrote for The Daily Wire and The Federalist. Follow him on Twitter @Gekaminsky.