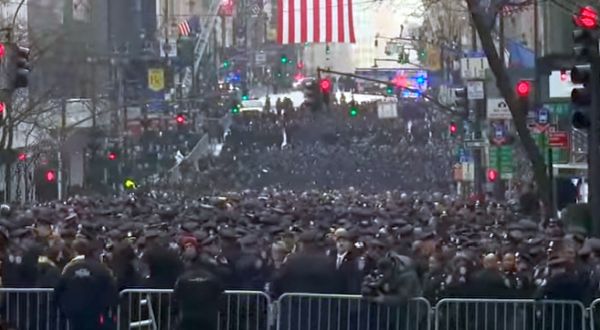 “I think it’s a direct correlation to the Democrat movement of defunding the police,” McCarthy told The Daily Caller News Foundation after his annual “Back the Blue Bike Tour on Thursday” in honor of National Police Week, which began on Wednesday. “It encourages people to go after them.”

“And then you have the whole Democrat philosophy of electing these DAs who will not uphold law enforcement, but more importantly won’t keep bad people in jail,” McCarthy said.

There were 73 officers killed in 2021 due to felonious acts, 27 more than in 2020, according to FBI data released on Monday.

Dozens of House Republicans just rode with me for my 2nd annual Back The Blue Bike Tour with police.
#PoliceWeek reminds us that law enforcement and their families are truly the best among us. Join us soon for a live event at the #LawEnforcementMemorial.https://t.co/VwFfcJK8sS pic.twitter.com/w96bHTPqmm

Is there a direct correlation between Democrat policies and police deaths?
100% (21 Votes)
0% (0 Votes)

“I think that part of it is just the rhetoric that comes from leadership,” Donalds told TheDCNF. “Everything rises and falls based on leadership, and when you have a political party that uses politics to demean officers on what they do every day in our communities, it’s awful.”

“It’s killed morale in so many areas of our country. It’s led to [a] terrible policy like defunding the police,” he said. “And it’s actually, in my view, has led to the targeting of officers so I do think they bear responsibility for that.”

Donalds said Democrats’ “words have consequences” and “unfortunately it’s led to a loss of life of many officers.”

Eight police officers have been shot in New York City this year, according to New York Republican Rep. Nicole Malliotakis, who lamented the rising violence.

“I’m here today to not just remember our two fallen ones that we lost in January. We started off the year very wrong,” Malliotakis said at a press briefing following the bike ride. “And we lost police [officers] Mora and Rivera.”

“But also to highlight what happened this week when a career criminal, who had been arrested nine times, was released back onto the street and shot a police officer,” she said. “Thankfully, that individual is dead but the police officer is alive.”

The White House and House Speaker Pelosi did not immediately respond to TheDCNF’s comment request.