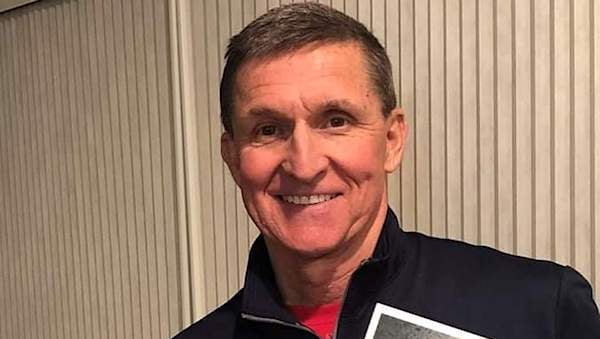 Former Trump National Security Adviser Michael Flynn is accusing the FBI and the Obama White House of "malicious prosecution" in a $50 million claim filed against the government, according to a report by John Solomon, who obtained a copy and published it at Just the News.

The claim is for "compensatory damages including but not limited to lost past and future earnings/revenue, emotional distress, lost opportunity to be President's National Security Adviser, significant restraints of personal liberty, attorney fees/expenses and court costs in defending against malicious prosecution, abuse of process, false arrest."

Flynn, in an additional filing, charges there was a "political" motivation behind the claims Washington insiders made about him allegedly lying to the FBI.

Those accused of participating in the scheme against him include the Department of Justice and Special Counsel Robert Mueller.

The report explained the claim was obtained by Just the News, although it was filed in February. The civil claim process also names the U.S. attorney's office in Washington charges the government players engaged in a "malicious prosecution" that was related to the now-debunked Russia collusion conspiracy theory, Just the News said.

Evidence suggests that was created when twice-failed presidential hopeful Hillary Clinton wanted to distract the public's attention from her own email scandals, and Barack Obama was briefed on her plan to tie then-candidate Donald Trump to Russian influences.

It actually was her own strategy that engaged Russian sources to make up wild claims about Trump, which eventually were compiled into what is called the Steele dossier, a document that was pushed aggressively to news organizations apparently with the idea they would write about them – and injure the candidate.

The filing includes a list of irregularities in the then-administration's attacks on Flynn, and said, "Of all of President Trump's appointees, the Obama White House hated Flynn the most."

It charges, "the FBI began to express disdain for candidate Donald J. Trump and began to consider ways in which it could hamper Donald Trump as candidate or as President, were he to win the 2016 election. As part of these efforts, the FBI began to target Flynn. Flynn was no stranger to the FBI and its leadership, many of whom considered Flynn to be a personal enemy of the FBI and the success of their own FBI careers.":

His lawyer, Jesse Binnall, said Flynn is ready to sue if the DOJ rejects his claim.

The three-star Army general was chief of the Defense Intelligence Agency, and when attacked by the coalition of Democrat power players, pleaded guilty to lying.

However, when evidence appeared that showed not even the FBI believed he lied to agents, and when agents wanted to shut down the case against him they were overruled by politically active supervisors, he asked to withdraw his plea. The DOJ eventually asked that his charges be dismissed and President Trump resolved the dispute with a pardon for Flynn.

His lawyer charges that evidence of the political influence on his case was the fact Flynn was the subject of a Jan. 5, 2017, meeting involving Obama, then-vice president Joe Biden and the FBI in the Oval Office.

According to Just the News, the filing explains, "During this meeting, the participants agreed to try to damage incoming President Trump and his new administration, including by trying to prosecute Flynn, President-elect Trump's incoming National Security Advisor, to cause him to resign as NSA, to cripple President Trump's ability to implement national security and foreign affairs policy changes, and potentially to get Flynn to turn on President Trump. They also agreed to withhold this agreement from the 'transition team.'"

The filing also charges Obama had been urging Trump to avoid Flynn.

It explains Flynn drew the ire of Washington insiders when he advocated for an FBI agent who accused McCabe of sex discrimination.

The claim lays out the scenario: "During that meritless and unlawful investigation and prosecution, Flynn was falsely and maliciously painted by the conspirators as a traitor to his nation who acted in concert with a foreign power, and the SCO even threatened Flynn's son with prosecution unless Flynn were to plead guilty. The federal government's targeting of a citizen for baseless criminal prosecution and eliciting a plea bargain through threatening of family members is outrageous conduct of the highest order. The fact that it was orchestrated and carried out at the highest levels of the FBI, DOJ, and White House makes it all the more outrageous."