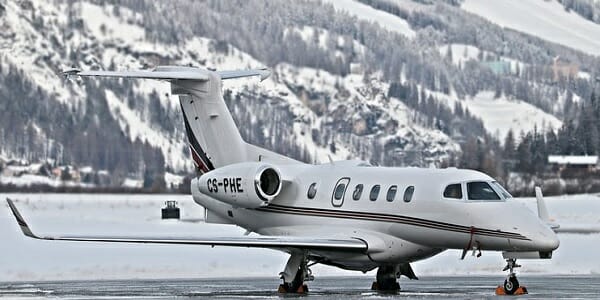 World government leaders, executives, celebrities and billionaires likely emitted thousands of pounds of carbon dioxide traveling to Davos this week where they warned of an impending “climate crisis.”

Global elites like George Soros, Bill Gates and John Kerry descended upon Davos, a remote Alpine resort town in Switzerland, for the World Economic Forum’s (WEF) annual meeting which lasted from Monday to Thursday. The conference’s “global agenda” focused largely upon sustainability and climate change with major event sessions titled “Safeguarding Our Planet and People” and “Staying on Course for Nature Action” while the group says it works with various stakeholders “limit global temperature rise and stave off disaster” on its website.

However, 10 private one-way flights that departed various European cities on Wednesday evening and landed in St. Gallen-Altenrhein Airport, the closest airstrip to Davos, emitted approximately 43,440 pounds of carbon dioxide into the atmosphere, according to a Daily Caller News Foundation analysis of flight logs, estimated fuel burn data for different aircraft models and an International Air Transport Association emissions calculation. The figure likely represents a minimum estimate since it doesn’t factor in the number of passengers or freight weight for each flight analyzed.

One of the analyzed flights traveled about 335 miles from Tuscany, Italy, to St. Gallen-Altenrhein Airport in a Bombardier Challenger 6000, a luxurious gas-guzzling business jet, and spewed approximately 13,532 pounds of carbon dioxide, the data showed. It is unknown who traveled on the journey.

A State Department spokesperson said Kerry, who President Joe Biden appointed as climate envoy, traveled to Davos on a commercial airline in a statement to TheDCNF.

The private jets of the climate hypocrites pic.twitter.com/zQkqAt7bJg

Overall, roughly 1,500 private jets flew to and from airports near Davos for the WEF annual meeting in 2019, according to an analysis from Air Charter Service, The Guardian reported at the time. The firm didn’t conduct a similar analysis for this year’s conference, a spokesperson told TheDCNF.

WEF also responded in 2019, saying the ACS estimate was an overestimate, but the organization conceded that more than 500 private flights were recorded at nearby airports during the conference that year. WEF added that the year-over-year decline in private jet travel was a “sign that participants are taking the environmental impact of their travel more seriously.”

Hundreds of roundtrip flights still spew hundreds of thousands of pounds of carbon dioxide, according to the Environmental and Energy Study Institute.

“Words from the locals, many flew in here yesterday and there’s typically a helicopter ride to Davos,” reporter Sophie Corcoran tweeted Monday. “Hypocrites.”

WEF didn’t respond to a request for comment from TheDCNF. Representatives for Soros and Gates didn’t immediately respond to requests for comment.