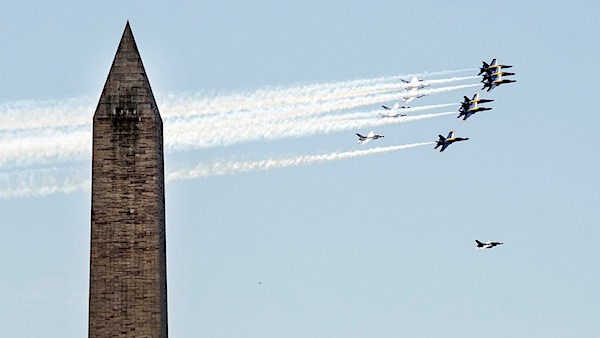 You probably can expect a "woke" campaign that will demand the U.S. Air Force rename its Thunderbirds exhibition flying team, those pilots who take America's jets into the skies and fly wingtip to wingtip at hundreds of miles per hour to promote the nation's military expertise.

That's according to an editorial in the Denver Gazette, which recently highlighted the fact that the Thunderbirds were providing an aerial demonstration flyover, as they usually do, at the graduation at the U.S. Air Force Academy at Colorado Springs.

It explains that Colorado has created a commission to banish such names from the state. And pointing at that commission, which admittedly "has no authority over the Air Force and its Thunderbirds squadron," it still notes it remains "easy to see" where the movement is heading.

The editorial explains the lawmaker-approved "Colorado Commission on Indian Affairs," has been assigned to "prohibit American Indian mascots" in schools across the state.

That entity recently declared 10 Colorado public schools "out of compliance" with its demands – and subject to fines – because "they each use 'Thunderbirds' as a mascot," the editorial said.

"'Thunderbirds' is so offensive, such a serious crime, that each school faces a $25,000 fine for each month it fails to comply with dropping the name within a year. That’s $300,000 a year that would not go toward teaching children or paying teachers the money they deserve because of a Thunderbird emblem," the Gazette editorial team wrote.

When the Air Force Thunderbirds perform, they draw fans from across the nation.

"It is a display of our culture’s commitment to freedom for all in the world’s most diverse society," the editorial said.

But, it said, "The commission found the mythical Thunderbird was important to some American Indian tribes. It was not and never has been anything other than a positive symbol of pride for those who use it."

The commentary warned, "Indeed, this is insane. It’s a disservice to schools, the Air Force Thunderbirds, American Indians, and any other person, demographic or organization that prizes this symbol of power, protection and strength.

"No one chooses the name and symbol of a Thunderbird as a sign of misappropriation or disrespect. If that were the case, we would have to consider one of our country’s most iconic air demonstration fleets a joke. We would have to believe Colorado schools are cruel enough to mock American Indians."

Supt. David Crews of Sangre de Cristo Schools, which has been put in a bull's-eye by the "woke" commission, said he was told that to comply with the politically correct demands, the school should cover up trophies – and anything else – that contain the Thunderbird symbol.

Students, he was told, could turn uniforms inside out to hide the offensive symbol.

The paper wrote, "We understand some Indian mascots are problematic, most notably the likes of 'Savages' and 'Redskins.' Nothing about 'Thunderbirds' sounds insulting to anyone. This is nothing more than left-wing revolutionaries getting drunk with power and control."