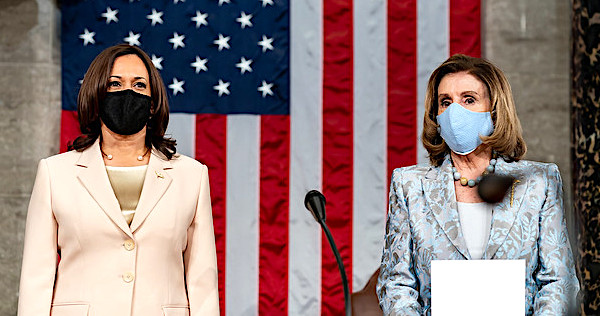 House Speaker Nancy Pelosi, who says she is a faithful member of the Catholic church but openly defies its teaching on abortion, has criticized the San Francisco archbishop who told her not to present herself for Communion.

And then she defied his instructions and took communion in Washington.

WND reported last week when Archbishop Salvatore Cordileone went public with his instructions to Pelosi, who has maintained over and over again her membership in the church whose teachings she defies, not to present herself for Communion.

Cordileone – after numerous appeals over many years – had told Pelosi Friday that she cannot receive Communion while vowing to codify Roe v. Wade.

Now she is on record condemning the archbishop for his biblical teachings.

"Now, our archbishop has been vehemently against LGBTQ rights, too, in fact, he led the way in some of the initiatives on — an initiative on the ballot in California. So this decision, taking us to privacy and precedent, is very dangerous in the lives of so many of the American people," she charged, according to a report in the Daily Wire.

In fact, the Bible expressly condemns homosexuality and warns of those who may hurt a child, "But whoso shall offend one of these little ones which believe in me, it were better for him that a millstone were hanged about his neck, and that he were drowned in the depth of the sea."

Pelosi charged that abortion is just a signal for a number of faith issues that she blames these "same people" for opposing.

"This is not just about terminating a pregnancy,” Pelosi said. “These same people are against contraception, family planning, in vitro-fertilization. It’s a blanket thing. They use abortion as the front man for it while they try to undo so much. That’s what they tried to do in the Affordable Care Act, which didn’t have anything about terminating an abortion — a pregnancy."

She said she comes from a "largely pro-life Italian-American Catholic family" and she has no respect for those to try to "foist" their beliefs on others.

The Daily Wire reported despite Cordileone’s letter informing Pelosi that she no longer receive communion over her ongoing and public support for abortion, the California Democrat attended mass on Sunday at Holy Trinity parish in Georgetown.

Here’s a video from @holytrinitydc showing House Speaker Nancy Pelosi receiving communion from a Eucharistic minister -not the priest- at mass on Sunday. She’s wearing an orange blazer in the right line. pic.twitter.com/4WnChU7KGj

Cordileone told Pelosi, "You are not to present yourself for Holy Communion and, should you do so, you are not to be admitted to Holy Communion, until such time as you publicly repudiate your advocacy for the legitimacy of abortion and confess and receive absolution of this grave sin in the sacrament of Penance."

She then went to another district of the church for communion.

The Daily Wire explained, "To receive Holy Communion, which Catholics believe is the body of Jesus Christ, one must be in a state of grace, which means that an individual has recently gone to the sacrament of confession and confessed all serious or mortal sins, and one must have fasted for at least an hour."

Earlier, WND reported the San Francisco Examiner's editorial board took upon itself the authority of a religious group and called on Pope Francis to remove Cordileone, claiming it is Pelosi, not the archbishop, being "loyal" to the Christian faith.

The board declared, "It is Nancy Pelosi, not Archbishop Cordileone, who reflects the true spirit of Christian care in the City of St. Francis."

A year ago, Cordileone also raised the issue of Joe Biden, another Catholic in open defiance of church teaching by his advocacy for abortion, receiving Communion.

When Cordileone issued the instructions to Pelosi, he noted she had "repeatedly rebuffed his efforts to reach out to her to discuss her abortion advocacy."