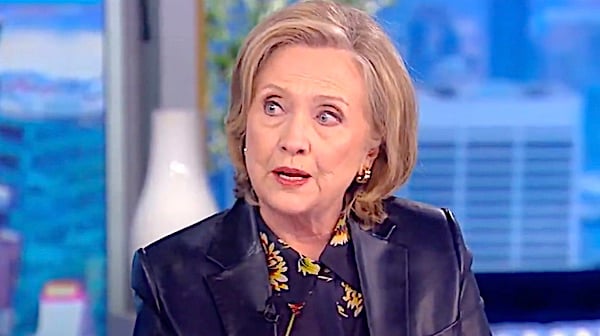 Sen. Chuck Grassley, R-Iowa, is accusing the FBI of having “a get-Trump-at-all-costs attitude.”

Speaking on the Senate floor Tuesday, Grassley, the ranking member of the Senate Judiciary Committee, highlighted new information that had come to light during the ongoing trial of Michael Sussmann, a lawyer for Hillary Clinton’s 2016 presidential campaign.

“The Clinton campaign fabricated evidence trying to connect [Donald] Trump to [Russia],” Grassley said. “They fed it to the media to start a yearslong wildfire of false allegations. They fed it to the FBI to trigger a federal investigation into their opposing candidate.”

As part of the continuing probe by special counsel John Durham, Sussmann is charged with lying to the FBI about whether he was coordinating with the Clinton campaign when he came forward with a tip that a Russian bank secretly communicated with Trump’s circle. Sussmann, the FBI’s source in pursuing alleged collusion between the Trump campaign and Russia, has pleaded not guilty.

In his remarks, Grassley highlighted how the FBI later suggested that the source of the Trump-Russia ties was the Justice Department, not an individual with ties to the Clinton campaign.

“I fear these recent developments are just the tip of the iceberg,” Grassley said. “The FBI’s exposure to false information and actually using that false information for investigative purposes reeks of a political vendetta. It points to a get-Trump-at-all-costs attitude.”

“Whether Sussmann is convicted or not, the evidence introduced by Durham shows serious government misconduct, misconduct by the federal government of the United States of America,” the Iowa Republican added.

Read Grassley’s full speech, pasted below, or watch it here:

That narrative started in 2016.

In that meeting, Sussmann provided information and data files that allegedly contained evidence of a secret communication channel between the Trump Organization and a Russian bank—Alfa Bank.

The evidence was fabricated by the Clinton campaign. The allegations about the Trump Organization being linked with a Russian bank were false.

Of note, Sussmann also provided Baker information Fusion GPS gave him as part of their work for the Clinton campaign.

This was an all-hands-on-deck strategy to destroy the Trump presidency and the campaign.

With the ongoing Sussmann trial, now underway here in D.C., the false Alfa Bank narrative is more relevant now than ever before. So I want to tell you why.

A mere several days after the meeting with James Baker, the FBI opened a full investigation on Sept. 23, 2016.

And around that time, an FBI agent working on cyber matters reviewed the information provided by Sussmann.

That agent said, “We didn’t agree with the conclusion … that this represented a secret communication channel.”

He also stated, “Whoever had written that paper had jumped to some conclusions that were not supported by the data,” and, “the methodology they chose was questionable to me.”

And here is the kicker: “I didn’t feel that they were objective in the conclusions that they came to. The assumption that you would have to make was so far-reaching that it just didn’t make sense.”

So last Friday in the courtroom, Robby Mook, Hillary Clinton’s campaign manager, testified that Hillary Clinton was asked about the plan to share this fake information with the media.

Jake Sullivan was involved in that decision as well. He’s, of course, as we know, [President Joe Biden’s] national security adviser.

The Clinton campaign fabricated evidence trying to connect [Donald] Trump to [Russia]. They fed it to the media to start a yearslong wildfire of false allegations. They fed it to the FBI to trigger a federal investigation into their opposing candidate.

I’ve said it before and I’ll say it again: The Clinton campaign was the conspiracy. And it was a big bag of dirty tricks.

This false Alfa Bank information eventually landed with the media outlet Slate, which ran an article on Oct. 31, 2016. After that article, Sullivan, the now-national security adviser, issued his now-infamous tweet: “This could be the most direct link yet between Donald Trump and Moscow.”

They weren’t the only ones pleased with this fake news. On Oct. 13, 2020, Sen. [Ron] Johnson and I wrote a letter to the FBI where we made public texts between [then-FBI Deputy Director] Andrew McCabe and [then FBI lawyer] Lisa Page.

Page says to McCabe: “The alfa bank story is in Slate.”

The FBI’s excitement didn’t end there. This week, [special counsel John] Durham’s prosecutors introduced a message between FBI agents that said, “People on 7th floor to include Director are fired up about this server.”

Now, there’s another data point that I want to share. Durham recently released notes from a March 6, 2017, meeting between the Justice Department and FBI officials. In that meeting, they discussed predication and Crossfire Hurricane issues.

This meeting was two weeks before [then-FBI Director James] Comey publicly announced his investigation into Trump. On that very day, March 6, 2017, I wrote a letter to Comey asking him questions about the Steele dossier.

My press release for that letter is titled “FBI Plan to Pay Ex-Spy for Trump Intel During Campaign Sparks Questions of Obama Administration’s Use of Federal Authorities for Political Gain.” That was from March 6, 2017. Now, in May of 2022, that title just about sums up Crossfire Hurricane as best as it can be described.

Now, in closing, I’d like to make a few notes with respect to predication.

[The] Sept. 23, 2016, FBI electronic communication opened a full investigation into the Alfa Bank allegations. But let’s unpack the first few lines from that document.

“The FBI received a referral of information from the U.S. Department of Justice.”

“The Department of Justice provided the FBI with a white paper that was produced by an anonymous third party.”

Well, the information didn’t come from the Department of Justice. It came from Sussmann and the Clinton campaign. Hardly an anonymous third party, since Sussmann himself showed up at the door.

By wording it this way, the document almost blesses this so-called white paper. Mind you, the white paper is the false Alfa Bank information.

By the looks of it, the FBI document contains false information.

I fear these recent developments are just the tip of the iceberg. The FBI’s exposure to false information and actually using that false information for investigative purposes reeks of a political vendetta. It points to a get-Trump-at-all-costs attitude.

Whether Sussmann is convicted or not, the evidence introduced by Durham shows serious government misconduct, misconduct by the federal government of the United States of America.