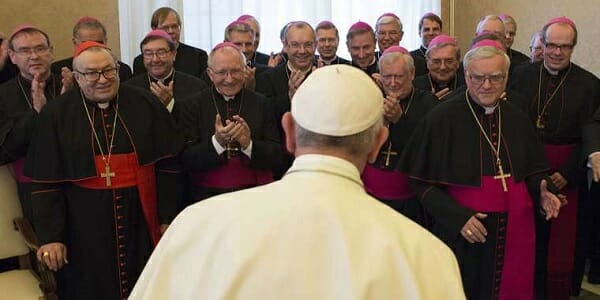 On Friday, San Francisco Archbishop Salvatore Cordileone notified House Speaker Nancy Pelosi that, until she undergoes "a conversion of heart," she is barred from receiving Holy Communion because of her support for "abortion and infanticide." Critics otherwise completely uninterested in theology – including those who make up the San Francisco Examiner's Editorial Board – leapt to pronounce with doctrinal certainty that the Archbishop's notification is a denial of Church creed. Make no mistake, it is wholly compatible with Pope Francis' own words and his witness of mercy.

Detractors are mainly pointing to the Holy Father's comments in 2021 during an in-flight presser, when he said he has "never refused the Eucharist to anyone" in response to a journalist's question about pro-abortion access politicians receiving Holy Communion. However, Pope Francis went on to call abortion "murder" and said of the preborn child, "It's a human life, period." He further compared the act of abortion to hiring a hitman, and added, "This is why the Church is so strict on this issue because accepting this is kind of like accepting daily murder." Pope Francis specifically followed up on the Communion issue, saying, "This is not a penalty: you are outside. Communion is to unite the community."

Pope Francis has been consistent on this matter. As an Archbishop of Buenos Aires, he was the principal author of a 2007 text by Latin American bishops called the Aparecida Document. "We must adhere to ‘eucharistic coherence,'" he wrote, "that is, be conscious that they cannot receive holy communion and at the same time act with deeds or words against the commandments, particularly when abortion, euthanasia, and other grave crimes against life and family are encouraged. This responsibility weighs particularly over legislators, heads of governments, and health professionals."

Three years later, in 2010, then-Cardinal Jorge Mario Bergoglio co-wrote a book with Rabbi Abraham Skorka, "Sobre el Cielo y la Tierra (On Heaven and Earth)," in which he wrote, "if a man, rather than uniting the people of God, has devastated the lives of many persons, he cannot receive communion, it would be a total contradiction."

Pope Francis has addressed the challenges in discerning whether to administer the Eucharist in particular cases, but ultimately acknowledges that bishops are sometimes called to do so. And it should be noted some of his boldest statements as pontiff are on abortion – the severest moral and physical wound of our time. As the former archbishop of Argentina's capital city and now bishop of Rome, Pope Francis can surely understand the position in which Archbishop Cordileone finds himself.

The Archbishop's action comes at a pivotal moment in our country's history, as the recent Supreme Court leak in Dobbs vs. Jackson Women's Health Organization revealed Roe v. Wade may soon be reversed. Pelosi called this draft decision "monstrous" and an "assault" on women. Some critics argue the Archbishop overstepped his bounds and violated the principle of separation of church and state. But this claim shows a poor grasp of the First Amendment. The Archbishop's decision is the exemplification of religious freedom. It is a response to Pelosi, not as a politician, but as a parishioner he pastors.

The Church's teaching here is merciful. It should be noted that the Archbishop's action comes from Book IV of the Code of Canon Law and not the Church's penal law. As the Archbishop himself is an expert in canon law, his decision is no accident. Nor is a sanction a penalty or an excommunication. Instead, it is simply a declaration of fact: the Speaker is "obstinately persevering in manifest grave sin" by promoting legal abortion. Again, as Pope Francis puts it, "This is not a penalty: you are outside."

It was Pope Francis himself who issued this revision of the Church's canonical legislation. The Archbishop, in a public letter to his priests this week, said Pope Francis pointed out three pastoral motives for this action: responding to the demands of justice, moving the offending party to conversion, and repairing the scandal caused. The Archbishop acknowledges it was those very motives that guided his decision – along with prayer, fasting, and consultation. In a Friday interview about this, he reiterated, "I'm guided by the principles articulated by Pope Francis and taking the approach of the advice that then Cardinal Ratzinger gave us."

The fact that "Communion is not a prize for the perfect" – another Pope Francis phrase – is exactly the point. The Eucharist is not a participation trophy. We are neither entitled nor worthy to receive the Eucharist. All Catholics must repent for our sins. This often gets messy and divisive because some of our sins are more public and obvious than others, but Jesus' Real Presence is worth the repentance.

Catherine Hadro is a national Catholic speaker, writer, and broadcaster. She is the founding host of EWTN Pro-Life Weekly and is an EWTN News Contributor. Follow @CatSzeltner