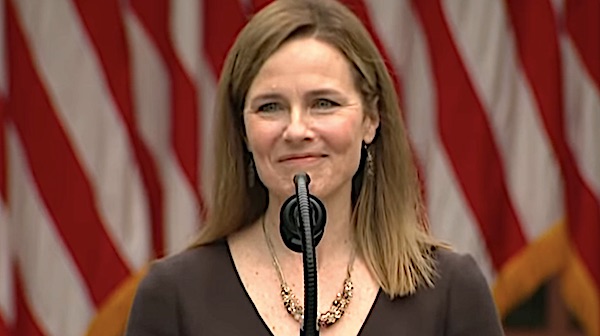 (NEW YORK POST) – A pro-choice protester in a “Handmaid’s Tale” getup justified rallying outside Amy Coney Barrett’s home by saying the Supreme Court justice doesn’t understand what it’s like “to carry a pregnancy to term” — even though she’s given birth to five kids.

The unidentified protester was one of six in red smocks and white bonnets who marched outside Barrett’s home in Falls Church, Virginia, on Wednesday, according to a video obtained by Fox News Digital.

The protester initially argued that Barrett, one of the justices expected to overturn national abortion rights given by Roe v. Wade, was biased by her devout Catholicism impeding her “ability to write sound legal” rulings.