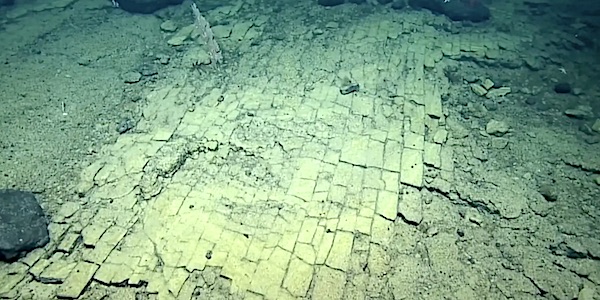 (NEW YORK POST) -- Not every road leads to Rome. Some paths appear to be headed to the center of the ocean — like one recently spotted by scientists in the Pacific that they dubbed the “road to Atlantis.”

Late last month, oceanographers aboard the EV Nautilus vessel were out exploring the floor of the Papahānaumokuākea Marine National Monument, a submarine range of volcanic mountains off the coast of Hawaii, when they came across what looked like a well-preserved brick road at the bottom of the sea.

On April 29, the researchers were amazed to see such a structure 3,376 feet underwater, near the top of Nootka Seamount. The discovery, as part of the Luʻuaeaahikiikekumu expedition, was captured on video during the group’s 24/7 livestream on YouTube.