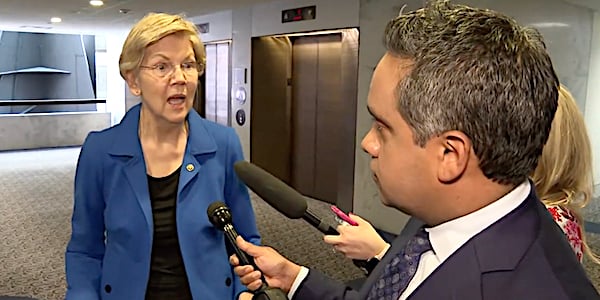 Sen. Elizabeth Warren, D-Mass. speaks to reporters at the Capitol on May 11, 2022. (Video screenshot)

Democratic Sen. Elizabeth Warren – who has expressed her anger over the possibility that Roe could be overturned – displayed a common misunderstanding about the American system of government when she was asked about the Senate's vote to not advance a bill aimed at codifying the 1972 abortion ruling.

Aside from ignoring the fact that the bill was defeated by a majority vote of 51-49, Warren implied that the United States is a pure democracy ruled by the majority.

"I believe in democracy, and I don't believe the minority should have the ability to block things that the majority wants to do," she told the Hill. "That's not in the Constitution."

Warren said it's "time to get rid of the filibuster."

She's right that the filibuster – requiring 60 votes to advance legislation – is a Senate rule that is not in the Constitution.

The Senate can eliminate the filibuster without violating the Constitution. But it's a rule that is consistent with the fact that the United States is a constitutional republic – built on representation, the rule of law and inalienable rights the government cannot take away – rather than a pure democracy in which the majority rules.

The Founders warned against the "tyranny" of "mob" rule. Thomas Jefferson famously said "elective despotism was not the government we fought for."

.@SenWarren: "I believe in democracy, and I don't believe the minority should have the ability to block things that the majority wants to do. That's not in the Constitution. [...] It's time to get rid of the filibuster." https://t.co/2tBTIfvv2q pic.twitter.com/UwZuKxrotg

In a walking interview May 3, Warren was asked her reaction to the leaked opinion indicating the Supreme Court is poised to overturn Roe v. Wade.

"I am angry and upset and determined," she said, her voice shaking.

Told by the reporter that she had never seen the senator so angry, Warren stopped walking.

"The Republicans have been working for this day for decades," she said.

"They have been out there plotting, carefully cultivating these Supreme Court justices, so they could have a majority on the bench who could accomplish something that the majority of Americans do not want."

On Twitter, meanwhile, Warren called for millions of Americans to "stand up and make their voices heard."

"An extremist Supreme Court is poised to overturn #RoeVWade and impose its far-right, unpopular views on the entire country. It’s time for the millions who support the Constitution and abortion rights to stand up and make their voices heard. We’re not going back — not ever," she tweeted.