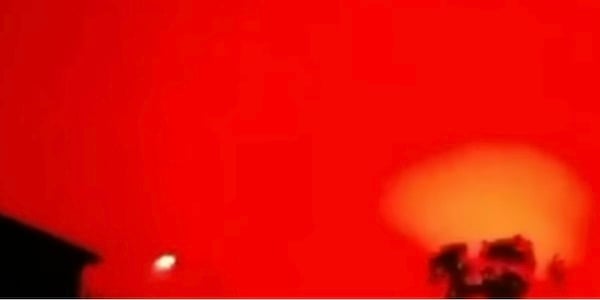 The sky over Zhoushan, China turns red on Saturday, May 8, 2022. (Video screenshot)

The sky turned a bloody shade of red in China on Saturday, sparking panic among residents, and now some are pointing to Bible prophecies about the end times and return of Jesus to Earth.

"Panic could be heard in the voices of the residents as they recorded the discolored horizon, stirring apocalyptic fears," Britain's Daily Mail reported. "The crimson sky was most prominent by the port, prompting worries that a fire had got out of control."

"I have never seen anything like this before. It really amazes me that the sky can even turn red," one resident of Chinese port-city of Zhoushan, which neighbors Shanghai, told the Global Times.

Users of Douyin, China's social version of TikTok, suggested the red sky was bad omen due to the government's poor handling of the COVID-19 pandemic.

"One user said it means: 'Accidents will happen,' with another adding, 'I started to stock up on supplies,' the Daily Mail reported.

Footage from the port-city of Zhoushan near Shanghai shows the sky turned blood-red under thick layers of fog.

Local residents panicked that the end of days had arrived, and called the red sky a bad omen for China pic.twitter.com/N13B5Pm0Me

At Israel365News, reporter Adam Eliyahu Berkowitz noted: "Bible scholars have no need to speculate about crimson heavenly portents frequently described by the prophets."

The Old Testament prophet Joel is among those who described such celestial phenomena associated with the "day of the LORD."

"I will show wonders in the heavens and on the earth, blood and fire and billows of smoke. The sun will be turned to darkness and the moon to blood before the coming of the great and dreadful day of the LORD" (Joel 2:30-31 NIV).

Chinese media said the intense color had nothing to do with the end of the world, but indicated: "It was foggy and cloudy in Zhoushan on Saturday and it was drizzling at the time of the red sky, which might have been caused by the reflection of light from the low-level clouds, a staff of the Zhoushan Meteorological Bureau explained," the Global Times reported. 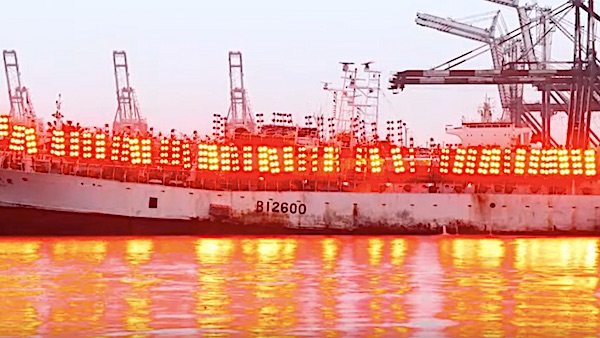 "When weather conditions are good, more water in the atmosphere forms aerosols which refract and scatter the light of fishing boats and create the red sky seen by the public," said bureau's staff.

Israel365News reported China has a history of odd weather phenomena, including some in recent years:

In 2021, Beijing was entirely engulfed in clouds three times in the space of five weeks.

In May 2020, Beijing was hit with a "plague of darkness" that was attributed to a combination of stormy weather and Beijing’s notorious smog.

Similarly, on June 4th, 2013, air pollution generated a similar blackout. The plague of darkness preceded the most important political event of the year when the Chinese Parliament convened to discuss COVID. The darkness hit on the anniversary of the forcible suppression of the student-led Tiananmen Square protests.

In April of 2021, Beijing was entirely engulfed in dust clouds three times in the span of five weeks, turning the skies dark. China is one of the countries most severely jeopardized by dust-sand storms and desertification, with about one million square miles of desertified land equalling about 27.9% of the country’s landmass. Studies point to the cause as deforestation and soil erosion which are indirect effects of the nation’s booming population.

Both Isaiah and Ezekiel describe these events:

The stars and constellations of heaven Shall not give off their light; The sun shall be dark when it rises, And the moon shall diffuse no glow. Isaiah 13:10