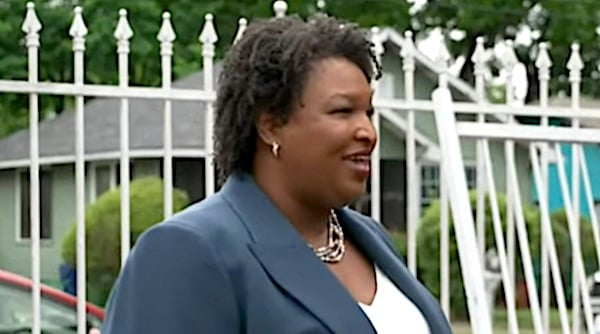 Stacey Abrams speaks with reporters in Tuesday, May 24, 2022. (Video screenshot)

Democratic Georgia gubernatorial candidate Stacey Abrams said that there was no causation between voter suppression and turnout when addressing Georgia’s record voting numbers during a press conference Tuesday.

Abrams suggested that there is not a causal relationship between turnout and suppression before stating that turnout is actually the “antidote” to suppression in response to a reporter’s question on Georgia’s record voter turnout.

“The question about voter suppression and voter turnout is causation without correlation,” Abrams initially said before correcting herself. “Sorry, see, you can make mistakes even when you know what you’re talking about.”

“It’s correlation without causation,” Abrams continued. “We know that increased turnout has nothing to do with suppression. Suppression is about whether or not you make it difficult for voters to access the ballot. And in Georgia, we know difficulty has been put in place for too many Georgians who vote by mail, who had to figure out a calendar of applying just early enough but not too late. You had to have wet signatures so they could print things out. Take a picture, upload it.”

Abrams went on to accuse counties in Georgia of “taking advantage of their election boards” to shift their dynamic to suppress votes. However, Abrams acknowledged that voters were showing up despite the alleged acts of suppression and that voter turnout was the “antidote” to suppression.

Abrams’ Campaign did not immediately respond to the Daily Caller News Foundation’s request for comment.