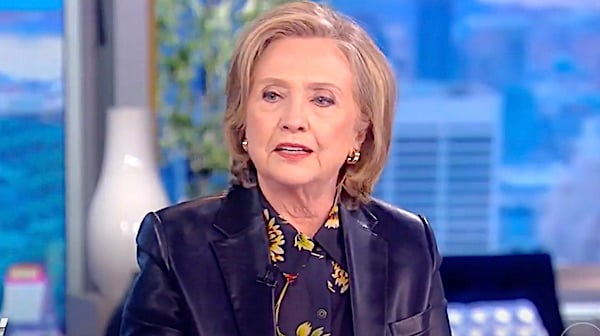 Twice-failed Democrat presidential hopeful Hillary Clinton, during her unsuccessful campaign against President Donald Trump in 2016, approved giving to reporters her campaign's claim that Trump was linked to the Russian Alfa Bank, even though that information was largely unsupported by evidence.

That's according to testimony from former campaign manager Robby Mook, who was testifying in the trial for campaign lawyer Michael Sussmann, who is charged by special counsel John Durham that he lied to the FBI.

On the charge Sussmann lied when he told FBI general counsel James Baker he was making allegations against Trump on his own, and not on behalf of any campaign, Baker himself testified that was not so.

He said, under oath, he is "100% confident" that Sussmann told him that, even though Sussmann actually was billing the Clinton campaign for his work.

Now Just the News reports that Mook confirmed Clinton approved turning over the unsubstantiated information claiming Trump had links to Alfa to reporters.

Mook testified that Clinton approved of going to the media with the allegation of a secret hotline linking the Trump Organization with Alfa Bank, the report explained.

He then "authorized a campaign staffer to go to the press," the report said, even though the campaign wasn't totally confident the information was true.

A report at Breitbart said not only were the Alfa link claims disproven later, so was the "broader 'Russia collusion' conspiracy theory" that the Democrats had created to use against Trump.

The scheme also involved payments from the campaign through some lawyers to Fusion GPS, which hired Christopher Steele to create the so-called "Steele dossier" of unsubstantiated claims about Trump, which also has been debunked as inaccurate.

Still-unnamed should be in parenthesis. Mook did not say "still-unnamed" ...

Mook said top staffers — John Podesta, Marc Elias, Jennifer Palmieri, Jake Sullivan — did not want the allegations turned over to the FBI because they weren’t “totally confident” in its veracity. #SussmannTrial