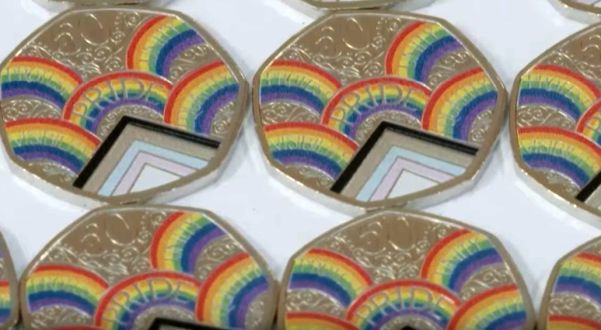 (VALIANT NEWS) – The Royal Mint has announced a new 50 pence coin, emblazoned with gay and transgender pride symbols, to celebrate half a century of LGBTQ+ Pride in the United Kingdom.

The new coin produced by the Royal Mint was designed by London-based tattoo artist Dominique Holmes, and features five rainbow flags, and a blue and pink transgender pride triangle, which also features two black and brown stripes to represent gay people of color.

The coin was created to mark the 50th anniversary of the first LGBTQ+ Pride parade in the UK, which was organized by the Gay Liberation Front and took place in London in 1972. Clare Maclennan, the Director of Commemorative Coin at the Royal Mint said in a statement it was “a privilege” to mark the “milestone celebration” of gay pride.