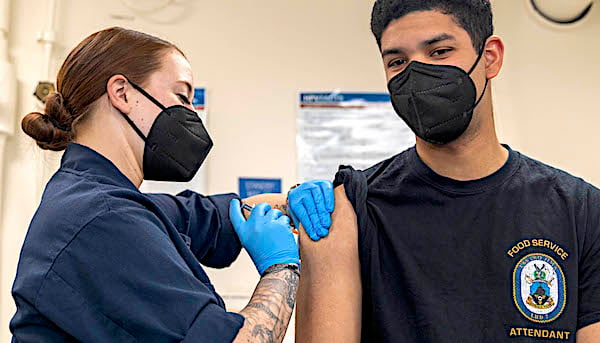 A board made up of the Navy's own officers has ruled against the military branch in a fight over a lieutenant who refused to take the experimental COVID shot, and had his career threatened as a result.

The decision was from a board of three Navy officers for Lt. Bill Moseley, and concluded Moseley did not commit misconduct by refusing the injection mandated by the military for the China virus.

"Although this [is] only one case of thousands and we have many more clients facing prosecution by the military," lawyer R. Davis Younts said in a statement, "we are encouraged that the truth was revealed in this board, and we hope this ground-breaking case sends a strong message to the Department of Defense."

The lawyer released a statement after the board last week found for his client.

Younts successfully argued that the order for military members to receive the experimental COVID 19 injection was not a lawful order.

That was because the military had not made any FDA-approved version of the shot available.

In fact, virtually all of the shots mandated by various government and private organizations during most of the fight against the pandemic were classified experimental.

"Lt. Moseley opposes the vaccine for religious reasons and could have submitted a religious accommodation request, however when he learned that the Navy and the other services intended to implement a blanket denial policy, he began to prayerfully consider other options," the lawyer's statement explained.

"After consulting the legal and medical experts, he became convinced that as an officer he had an obligation to take a stand against the unlawful order and be a voice for thousands of enlisted sailors. Lt. Moseley risked his 22-year career and his military retirement because of his faith and his commitment to his oath of office as a military leader."

A report at Just the News called the decision "a stinging rebuke to the Pentagon."

The report noted, "Any service member who has been in the military for more than six years is entitled to the board for due process. In the Navy, the board's recommendation on whether to retain or separate (another term for firing) a member of the service is binding."

The board's 3-0 decision was that Moseley's failure to follow the orders to take a COVID shot did not count as misconduct and that he should remain in the Navy.

Moseley enlisted in the Navy in 2000, reaching the rank of Gunners Mate Chief Petty Officer before earning a commission in 2014. He's served in Bahrain and Guam.