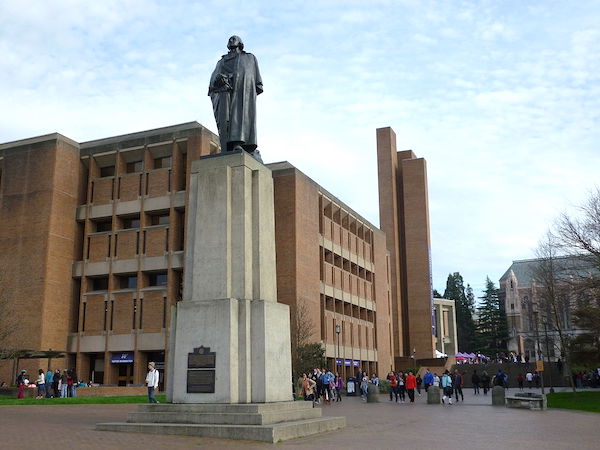 Statue of George Washington at the University of Washington in Seattle. (Wikimedia Commons)

Calling the nation's first president "an enslaver of men," the Black Student Union at the University of Washington in Seattle organized a protest calling for the removal of the statue of George Washington from campus and for the abolition of police.

"Hey hey, ho, ho, these racist cops have got to go" and "the people united, will never be divided" the protesters chanted in a May 20 rally, The College Fix reported.

The statue is frequently defaced with graffiti, the university's newspaper, The Daily, said.

But a student activist, Morgan Golden, told the campus paper the messages should not be ignored.

"There’s obviously some meaningful intentions behind some of the graffiti, but for such an inclusive school, our faculty leaders do nothing to support the conversation behind the messages or to raise awareness to why students feel the need to bring attention to certain things," Golden said. "They'd rather just pretend it never happened."

Earlier this month, the iconic paper bearing the name of the father of our nation published an op-ed calling for the renaming of George Washington University in the nation's capital.

Will leftists be successful in removing the George Washington statue from the University of Washington?
51% (102 Votes)
49% (99 Votes)

The author of the Washington Post op-ed, a student at George Washington University, contended the university's low number of black professors and general lack of black culture is "rooted in systemic racism, institutional inequality and white supremacy," and disassociating with the slaveholding first president is a good place to begin fixing the problem.

The university's renaming of the student center that once honored segregationist Cloyd Heck Marvin "falls short in addressing the main issues of systemic racism and inequality still present on campus," wrote the student, Caleb Francois.

"The hypocrisy of GW in not addressing these issues is an example of how Black voices and Black grievances go ignored and highlights the importance of strong Black leadership," he said.

The student suggested the names of Malcolm X and abolitionists Frederick Douglass and Sojourner Truth be considered as possible replacements.

"A new name would cement the university’s dedication to racial justice and affirm its commitment to change. It’s time to take action," the senior wrote.

To know what progressives will do next, just watch what they assure you they are definitely not doing next. https://t.co/xB5LDKQJDV

Substack writer Kyle Orton tweeted: "In better times, this kind of adolescent silliness was confined to campus, rather than being in the @WashingtonPost. Of course, in those times, the author would also have grown out of it. Now, the commanding heights share his views."