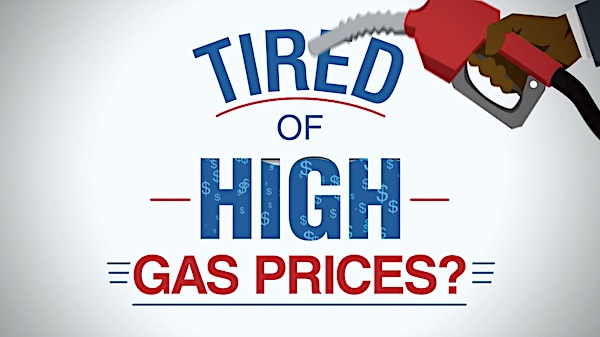 The Fueling American Jobs Coalition (FAJC) — a group of independent U.S. oil refiners, energy industry workers and local gas station owners — said the campaign began Sunday with an ad buy during “Meet the Press” on NBC News and would continue on local news programming in nine key media markets nationwide including Philadelphia and Washington, D.C., according to the announcement Monday. The ad argued that fixing the Renewable Fuel Standard (RFS) could immediately save Americans 30 cents per gallon on gasoline.

“Tired of high gas prices? There’s a fix,” the ad stated. “With just the stroke of a pen, President Biden can cut up to 30 cents off every gallon you pump, by fixing the federal Renewable Fuel Standard. Reforming the RFS would lower your gas prices, protect our nation’s fuel supply and save American refinery jobs. It just makes sense.”

The RFS, first implemented in 2005, is a program that mandates U.S. fuel contains a certain amount of renewable fuels. Such renewable fuels, or biofuels, are derived from feedstocks like corn or grain sorghum and demonstrate between 20-60% reduction in greenhouse gas emissions.

The FAJC has argued that the RFS adds about $30 billion in costs to Americans on an annual basis stemming mainly from the Environmental Protection Agency’s Renewable Identification Numbers system, which forces refiners to pay for renewable fuel compliance credits, the group said.

“The sky-high and volatile cost of these credits has also forced many merchant refiners to spend more on the program than all other operating costs combined, contributing to eight refineries closing or announcing closure in the last two years alone,” the group said on Monday.

Meanwhile, the average cost of gasoline nationwide increased to $4.33 per gallon on Monday, slightly below the all-time high set in March, according to AAA data.

The industry group has also opposed a recent Biden administration action on proposed biofuel blending volume requirements which it said would be impossible to meet.

The White House didn’t immediately respond to a request for comment from the Daily Caller News Foundation.

WND News Services
These reports are produced by another news agency, and the editors of WND believe you'll find it of interest.
Top Dem says U.S. is ready to ban gasoline cars, but he himself drives a gas-guzzler
Dozens of deputies deprived of guns and badges due to 'unsatisfactory' psych exams
Can HIV-positive student be in U.S. Armed Forces? Pentagon finally decides
Telling a student to get an abortion could be a felony, universities warn
Biden's Treasury secretary could be on her way out, report says
See more...