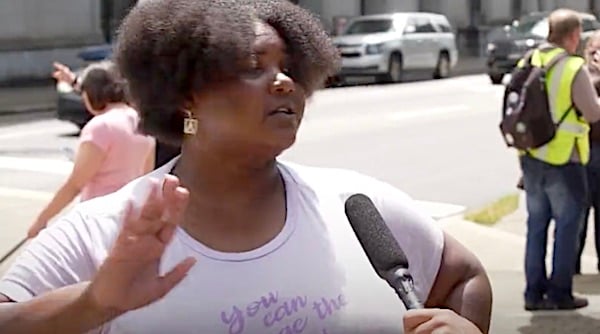 An abortion activist supports a woman's right to kill children apparently at any age. (Video screenshot)

Pro-abortion radicals appeared to be reaching new extremes regularly even before a draft Supreme Court opinion that would overturn Roe v. Wade was leaked to the press a few weeks ago.

Several states have adopted, or at least proposed, laws that are worded so as to suggest a baby could be terminated even after birth.

Now there appears a pro-abortion activist who has given carte blanche to women to "abort" their children for whatever reason, whenever, apparently.

The video was captured by the pro-life organization called Live Action, and it came from a "pro-abortion woman" who confirms "it would be legal to kill a child at any point after birth."

She was attending a "BansOffOurBodies" pro-abortion rally.

WATCH: Pro-Abortion activist says mothers should be able to abort children after birth: “It’s going to always be her choice.”

The exchange, in which a singular theme appears regularly during the responses:

Live Action: Do you believe in abortion after birth?

Activist: I believe in whatever the woman wants to choose to do, that’s her choice.

Live Action: At any point in the child’s life?

Activist: At any point in the lady’s life, that’s her choice.

Activist: It’s going to always be her choice.

Live Action: Even after the baby’s born?

Live Action: I can kill my two year old?

Live Action: To kill their child at any point?

At the RightScoop was the comment: "Just when you thought pro-abortion activists couldn't get any more radical…"

The commentary said, "The interviewer couldn’t be more clear about what she’s asking of this pro-choice lunatic, who is so demented that she claims it should always be the woman’s choice to murder her baby even after it is born, at any point."

In a recent installment, Hernandez polled several people about their responses to California’s bill, AB 2223, which has been dubbed the ‘infanticide’ bill. Though so-called fact-checkers have denied that the would legalize infanticide, the fact remains that, as written, the bill shields women and anyone assisting them from prosecution for perinatal death — meaning the death of a child outside the womb, up to one month old (as defined by California state law).

A man being interviewed said, "So I prefer that most women make their decisions at eight weeks, but if — I’m also in support of 10 months out of the womb."

Actually, as WND has reported, Colorado has moved aggressively to allow "perinatal" deaths of infants, using a term that could mean abortion before birth or after.

Then Decision Magazine reported California's AB 2223 changes the state Health and Safety Code that would do the same.