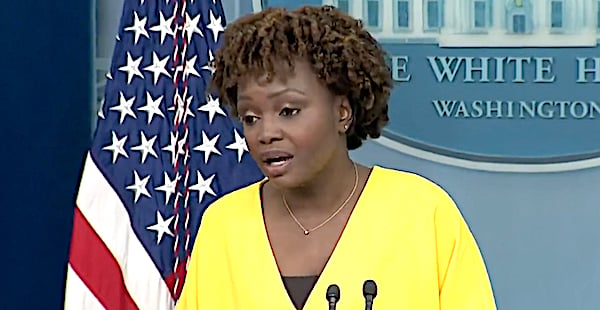 The White House insists the "pausing" of the plan to establish a Disinformation Governance Board doesn't mean the effort to combat "disinformation" has stopped.

At the daily briefing, Biden press secretary Karine Jean-Pierre said the board was put on hold because it was "mischaracterized" by critics, but the work will go on.

DOOCY TIME: "Last wk, you guys said...you needed the Disinformation Governance Board at DHS to make sure...freedom of speech is protected across the country & that these platforms are not used for forums of disinformation...What changed?"

KJP laments it's been "mischaracterized" pic.twitter.com/U7SwoonTZ3

The Washington Post reported Wednesday the board was paused not because it resembled the totalitarian Ministry of Truth in Orwell's "1984," but because of a right-wing "disinformation" smear campaign,

Jean-Pierre's remarks about the board on Wednesday came in response to Peter Doocy's question seeking confirmation of the Post's thesis.

"Last week, you guys said that you needed the Disinformation Governance Board at DHS to make sure that freedom of speech is protected across the country and that these platforms are not used for forums of disinformation," Doocy said. "So, what changed?"

Jean-Pierre citing the DHS statement saying the board had been "intentionally mischaracterized."

"It was never about censorship, policing speech, or removing content from anywhere," Jean-Pierre contended.

She said it was about making sure DHS was aware of threats posed by disinformation planted by foreign actors.

Doocy followed up: "So, if it’s pausing because you think the board was mischaracterized, then the Disinformation Board is being shut down because of disinformation? Is that what’s happening here?"

"Look, I mean the board was put forth for a purpose, right?" Jean-Pierre replied. "To make sure that we really did address what was happening across the country when it came to misinformation."

"Well, no it's just — it's going to pause. There's been mischaracterizations from outside forces," Jean-Pierre said.

DHS decided Monday to put the board on hold amid a public backlash. On Tuesday, the board's executive director, Nina Jankowicz, drafted a resignation letter.

The Post lamented that Jankowicz's "experience is a prime example of how the right-wing Internet apparatus operates, where far-right influencers attempt to identify a target, present a narrative and then repeat mischaracterizations across social media and websites with the aim of discrediting and attacking anyone who seeks to challenge them."

The paper said it also "shows what happens when institutions, when confronted with these attacks, don’t respond effectively."

"Experts say," the Post then informed its readers, "that right-wing disinformation and smear campaigns regularly follow the same playbook and that it’s crucial that the public and leaders of institutions, especially in the government, the media and educational bodies, understand more fully how these cycles operate."

The widespread criticism of the board, however, centered on the fundamental problem of creating a government entity with the task of censoring speech and equipping it with the power to define what kind of speech constitutes a "threat" to the homeland.

Art Moore
Art Moore, co-author of the best-selling book "See Something, Say Nothing," entered the media world as a PR assistant for the Seattle Mariners and a correspondent covering pro and college sports for Associated Press Radio. He reported for a Chicago-area daily newspaper and was senior news writer for Christianity Today magazine and an editor for Worldwide Newsroom before joining WND shortly after 9/11. He earned a master's degree in communications from Wheaton College.
@@arthurdmoore
CDC knew COVID vax causes heart problems but kept mum
'Disgusting': CDC's honoring of 'sacrifice' of Tuskegee subjects backfires
'Open season': Marriage bill empowers feds 'to attack people of faith'
Elon Musk: Twitter in 'battle for the future of civilization'
Arizona official: I was forced to certify Katie Hobbs' election
See more...