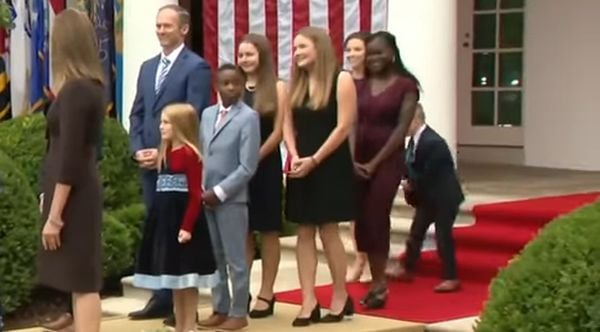 A radical pro-abortion organization has implied a threat to the spouses and children of Supreme Court justices, over the looming decision that could overturn the Roe v. Wade federalization of abortion regulation back in 1973.

A draft opinion that was leaked from the court a few weeks ago suggested that a majority of the justices were aligned with that perspective – which would return regulation of the nation's lucrative abortion industry to states.

The court has launched an investigation into that leaker.

And there have been organized – and sometimes threatening – protests at the homes of the justices already, accompanied by many instances of violence against pro-life pregnancy centers across the nation.

But a report at PJMedia documents one group going over the line.

The organization reported that just after "a deranged man traveled across the country with the intent of assassinating Supreme Court Justice Brett Kavanaugh, a repugnant activist group calling itself Ruth Sent Us was putting targets on the backs of conservative justices' children."

It was the same group that previously publicized the justices' home addresses.

"On Wednesday, Ruth Sent Us tweeted a smarmy parody of concern for Justice Kavanaugh and rejected taking any responsibility for inspiring the assassination attempt. Then the group went right over the line and brought his wife and children into the conversation," PJMedia reported.

The group said, on social media, "A special message for Ashley Kavanaugh and your daughters — this billboard was on your school grounds. We feel for you."

The message said, "@LeaderMcConnell and the GOP aren’t worried for your safety. They worry only for the expensive Supreme Court they rigged, and their own power. #SCOTUS."

A special message for Ashley Kavanaugh and your daughters — this billboard was on your school grounds. We feel for you.@LeaderMcConnell and the GOP aren’t worried for your safety. They worry only for the expensive Supreme Court they rigged, and their own power. #SCOTUS pic.twitter.com/g3n5fgjNZW

PJMedia explained, "In other words, 'We know where your kids are, we can get there any time, and no one will protect you.'"

The PJMedia report said, "Ruth Sent Us dances along the edges of Twitter’s safety rules. The platform prohibits violent threats, promotion of terrorism or violent extremism, and inciting harassment or violence. Pointing potentially violent people at a target with a wink and a nod is vile enough, but putting children in the crosshairs is inexcusable."