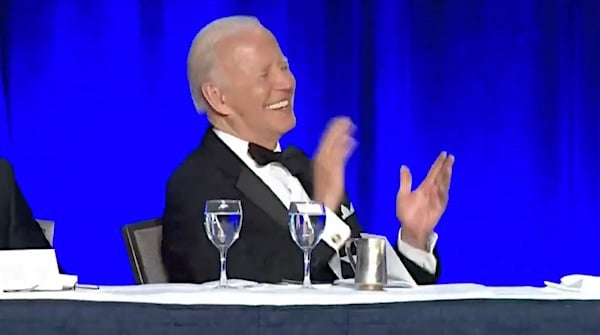 Joe Biden is strategizing now to rig the 2022 vote results, and is hiding his schemes from the American public "until at least after the November midterm elections," charges the editor-in-chief at The Federalist and a senior journalism fellow at Hillsdale College.

Mollie Ziegler Hemingway, also a Fox News contributor whose work has been in the Wall Street Journal, USA Today, the Washington Post, CNN and more, wrote that all the signs are there he's engaging in "a concerted effort" to rig the results.

"The lack of transparency … is so bad that the Department of Justice and some of its agencies have been repeatedly sued for the information," she charges.

"President Biden really does not want the public to know about his federal takeover of election administration. Dozens of members of Congress have repeatedly asked for details, to no avail. Good government groups, members of the media, and private citizens have filed requests under the Freedom of Information Act. Not a single one has been responded to," she wrote.

The secrecy, she said, follows Biden's demands of "all 600 federal agencies to 'expand citizens' opportunities to register to vote and to obtain information about, and participate in, the electoral process.'"

Previously, Republican politicians, constitutional scholars and election integrity specialists have worried "exactly what was up his sleeve."

She explained, "The 2020 election had suffered from widespread and coordinated efforts by Democrat activists and donors to run 'Get Out The Vote' operations from inside state and local government election offices, predominantly in the Democrat-leaning areas of swing states. Independent researchers have shown the effect of this takeover of government election offices was extremely partisan and favored Democrats overwhelmingly."

At the time Biden issued his order, Democrats were scheming to impose H.R. 1 on the nation, which would destabilize elections across the nation by giving federal officials authority over them.

Interestingly, Democrat leaders like House Speaker Nancy Pelosi have expressed strong confidence in a Democrat victory in 2022 – and Democrat congressional majority – following this fall's elections, despite the fact that virtually all polls are expecting a GOP takeover in the House, and possibly the Senate.

Biden's order demanded that every federal agency, within 200 days, give to Susan Rice, his "hyperpartisan domestic policy adviser," their plans.

But those all still remain concealed, Hemingway said.

Citing critics of Biden's conspiratorial plans, she said, "It’s unethical to tie federal benefits to election activity. It’s unconstitutional to have the federal government take authority that belongs to the states and which Congress has not granted. And, given that all 50 states have different laws and processes governing election administration, it’s a recipe for chaos, confusion, and fraud at a time when election security concerns are particularly fraught."

And "mobilizing voters," she said, is always "political."

"Choosing which groups to target for Get Out The Vote efforts is one of the most important activities done by political campaigns. Federal agencies that interact with the public by doling out benefits can easily pressure recipients to vote for particular candidates and positions," she said.

And the Hatch Act was adopted in 1939, banning bureaucrats and bureaucracies from being involved in election activities, after Democrats then used the Works Progress Administration programs for partisan political agendas.

In fact, Hemingway said, Biden's order copies much of its demands from a "left-wing dark money group" called Demos, and it was that group's former officials, K. Sabeel Rahman and Chiraag Bains, that Biden installed in White House jobs watching elections.

"Conservatives may be in the dark, but left-wing activist groups are fully involved in the plot," Hemingway said.

Demos even volunteered to help federal agencies submit to Biden's order, and then confessed it "organized agency-based working groups and met with the staff in these agencies to provide technical expertise as they developed their initial voter registration plans, to ensure those plans reflect the knowledge and priorities of various agency stakeholders."

Biden's scheming and concealing already has raised concerns in Congress, where Rep. Ted Budd, R-N.C., and others demanded information of the Office of Management and Budget, which refused to respond.

Hemingway noted that facts that have emerged include that the Department of Labor has boasted of turning 2,300 American Job Centers into "voter outreach" centers, and the Centers for Medicare and Medicaid Services is doing the same with "thousands of health care facilities."

Also, the Department of Housing and Urban Development told public housing officials to run voter registration drives, even though they previously were barred because they get federal money.

And the "Department of Education sent 'dear colleague' letters to universities, telling them that Federal Work Study funds could now be used to support voter registration activities, contrary to previous guidance. The change was made without having gone through any rulemaking process to allow the change," Hemingway reported.

The Department of Agriculture is using "child nutrition programs" to push voter registration.

She explained, "Americans have a right to know whether these bureaucracies that are meddling in elections have experts in for each state’s election laws, what type of training is going on to ensure that state laws are being followed, whether they are allowing inspections and oversight to ensure no illegal activity, how they are determining whether a third-party group is genuinely non-partisan, whether they are allowing state investigators to approve money, and how much is being spent on this federal takeover of elections."

Just a day earlier, Margot Cleveland, a senior legal correspondent at The Federalist, wrote house the Democrats rigged the 2020 results.

That election, she said, "was rigged with every illegal drop box placed in Democrat-heavy precincts," and "when the Pennsylvania legislature unconstitutionally authorized no-excuse absentee voting and when Philadelphia clerks illegally inspected ballots and then told Democrat activists which voters needed to cure their ballots for their votes to count."

Also, "when Wisconsin election officials ignored the state election code, telling voters they were 'indefinitely confined' because of Covid and that nursing homes could ignore Wisconsin’s requirement that special voting deputies oversee elections in residential facilities," and "with every dollar of Zuck Bucks designed to get out the Democrat vote, and with every leftist activist embedded in county clerks’ offices to push such efforts while accumulating untold voter data to the benefit of the Biden campaign."

Other factors: "Georgia rendered the election code’s mandate of signature verifications inoperable and the state court delayed a hearing on Trump’s challenge to the Georgia outcome until after the vote certification, thereby ignoring evidence that more than 35,000 illegal votes were included in the state’s tally — more than enough to require a court to throw out the election."