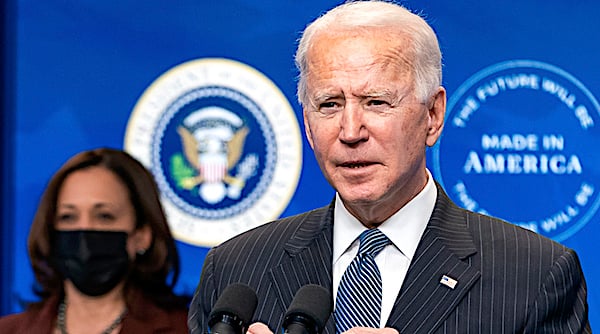 It's no secret that within the Democrat party there are huge disputes looming. With the likelihood of a GOP majority after November's election at least in the House and possibly the Senate too, there's going to be a lot of finger-pointing.

That's the one that would be used to remove from office an incapacitated president.

The report, by Martin Walsh, points out tensions between the two offices have been heating up already.

Now Morris claims "Biden’s aides are leaking stories criticizing Harris because they are concerned she will invoke the 25th Amendment in an attempt to remove the president from office," the report said.

Morris had cited a New York Times report that discussed how Harris "is not ready for prime time," and noted her actions to antagonize her staff. In fact, she's had a multitude of staff members quit her office.

Further, the Times said, "She screwed up on the trip to the border."

In fact, Biden assigned her the chore of addressing the crisis of illegal aliens flooding into the U.S. after Biden canceled President Trump's successful borders security programs. She's obtained largely no results.

Morris, the report said, believes the leaks for that piece "must have undoubtedly come from the Biden forces."

Morris explained, "The rumor I keep hearing from sources close to the White House is that Biden is getting worse. That the dementia is really becoming noticeable and harder to control and harder to camouflage. I believe there may be a move coming to invoke the 25th Amendment against Biden and replace him with Harris."

He continued, "Biden’s people are pushing back against it by shooting at Harris and saying that she’s not really ready to be president."

Part of the impetus is sheer panic, Morris explained.

"The Democrats are realizing they're cooked in 2022 … They will lose the House. The Senate, they might also lose."

The subject of Biden's fitness also has started making appearances on leftist media reports – not just the conservative publications where actions by Biden suggesting an approach to dementia is happening already have been widely documented.

Recently, Don Lemon on CNN bluntly asked White House Press Secretary Karine Jean-Pierre if Biden is ready, with stamina and mental fitness, to run for a second term in 2024.

Jean-Pierre deflected, insisting "That is not a question that we should be even asking."

The report noted that the fact Lemon asked the question "speaks volumes about just how bad things have gotten under Biden."

The Times also pointed out that Democrats are venting about Biden's failure to advance their agenda, and questioning his ability to rebuild the party from what is expected to be a horrible 2022 election.

Regarding Harris, the New York Magazine said, "There Has to Be a Backup Plan. There’s a Backup Plan, Right? Inside the 2024 soul-searching that’s happening in every corner of the Democratic Party."

There, Gabriel Debenedetti wrote that there appears to be a divide between Biden and his supporters and Harris and hers.

Debenedetti wrote, "With Trumpism re-ascendant, ambivalence about Biden’s age and political standing is fueling skepticism just as the image of his understudy, Vice-President Kamala Harris, dips even further than his. The most recent analysis from the Los Angeles Times has her net approval rating at negative 11. The result is a bizarre disconnect within the Democratic Party, with two factions talking past each other."

Of course, both Biden and Harris are turning in approval ratings as low as any administration ever has gone at this point.