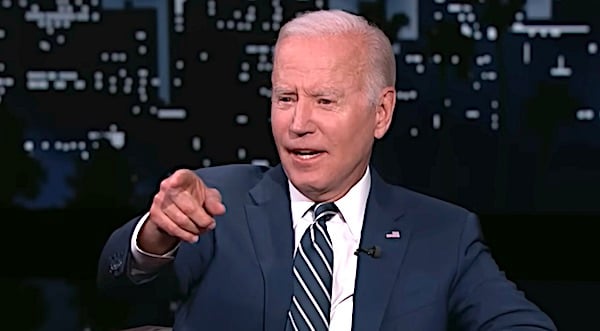 Amid demands from his far-left base to take immediate action to "protect abortion rights" in the event the Supreme Court overturns Roe v. Wade, President Joe Biden and his staff are considering declaring a public health emergency, according to the New York Times.

The paper said the administration would use an emergency declaration to ensure that physicians who carry out abortions in states where they are not licensed are shielded from legal liability.

Another proposal is that physicians in states that ban abortion conduct the deadly procedure on federal land, such as military bases.

At a news conference, Sen. Patty Murray, D-Wash., expressed dissatisfaction with the administration's preparation for the impending ruling.

"We need the Biden administration to step up to the plate and do everything it possibly can to protect the right to abortion," she said.

Murray said the Supreme Court is preparing to release a ruling that will unleash "a tsunami of trigger laws that will create chaos and deny millions of patients the ability to get the care they need."

"We need a plan from this administration as soon as humanly possible," she said.

The Democratic senator said that after the draft opinion of the Mississippi abortion case was leaked, she "pushed" Health and Human Services Secretary Xavier Becerra "on the administration's plan."

She said she wasn't satisfied with his response, and consequently she and Sen. Elizabeth Warren, D-Mass., urged Biden to issue an executive order "instructing every federal agency to develop a plan protecting the right to abortion."

"We're not going to sit around quietly waiting for him to act. Fair warning, Mr. President. We are going to be loud," Murray said.

The Times said the Biden administration is also exploring ways to get around the Hyde Amendment, which prohibits the use of taxpayer to pay for abortions.  The Justice Department's Office of Legal Counsel, the paper reported, is looking at whether federal funds could be used to pay the travel expenses of women seeking an abortion in another state.

"It’s just ridiculous in my view, and I don’t think the country will stand for it," he said of overturning Roe. "But I think what we’re going to have to do, there's some executive orders I could employ, we believe, we’re looking at that right now," he said.

Last month, the Biden administration decided to extend the COVID-19 public health emergency past mid-July. HHS has renewed the emergency order since January 2020, allowing the government to grant emergency authorizations of drugs, vaccines and other medical measures.

Sen. @PattyMurray: "We need the Biden administration to step up to the plate and do everything it possibly can to protect the right to abortion. [...] We're not going to sit around quietly waiting for him to act. Fair warning, Mr. President. We are going to be loud." pic.twitter.com/Ih7iMrTYyG