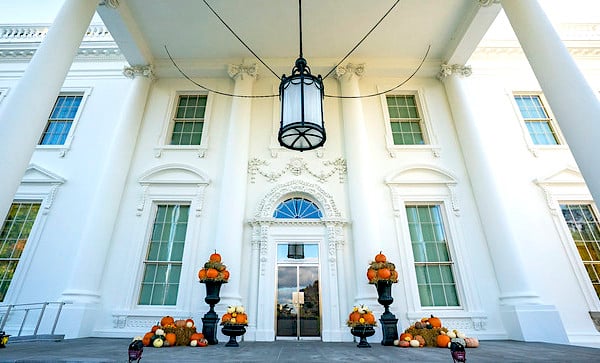 Conservatives are measuring the drapes in the Oval Office. And in the Eisenhower Executive Office Building. Less than halfway through Joe Biden’s first term, rightward-leaning political players have plans for making each and every administrative agency in the entire federal government their own.

The Heritage Foundation is betting that President Biden won’t be reelected – and that even if Biden doesn’t run again his successor will not be a Democrat. For months, the veritable conservative think tank has been designing a ready-to-go agenda for a future Republican White House, detailing everything from what policies a Republican administration ought to pursue to which staffers they should hire.

While certainly proactive, especially this early on, such blueprints are not new. What is unique is the coalition that Heritage has built and RealClearPolitics is first to report: a broad alliance of nearly two dozen major organizations, spanning the conservative universe and working in concert to prepare the next GOP president to begin undoing the Biden legacy “on hour one, day one.”

The blueprints are the product of what Heritage calls the “2025 Presidential Transition Project.” The coalition: “the Advisory Board.” The overarching goal: “cleaning up the devastation caused by four years of Joe Biden’s rule.”

That is the vision according to Heritage President Kevin Roberts who took the helm of the organization last autumn. “It is not enough for conservatives simply to win elections,” he said. “We must ensure that the right people – those who love this country and are willing to fight for her – are serving in key roles in the next administration.”

The new initiative was born of previous failure, or, at very least, opportunities not fully realized. “We don’t want a repeat of what happened in 2016 and 2017,” Roberts told RCP. After that election, all of Washington was stunned when Donald Trump defeated Hillary Clinton. The shockwave even sent conservatives back on their heels. And the Trump transition that followed was ad-hoc and chaotic. “As a movement,” said Roberts, who was president of the Texas Public Policy Foundation at the time, “we were not at the top of our game.”

The Trump administration fielded a ragtag roster during its early days, a team who seemed to make up plays at the line of scrimmage. “It was almost to the point of despair, from my vantage point,” Roberts said, “that we weren't able to provide this game-changing president, in terms of policy, the people and policies that we should have.”

The coalition Heritage has built intends to improve on that track record. Enter: Paul Dans, the former chief of staff of Trump’s Office of Personnel Management who will lead the project.

With Dans at the helm, the coalition plans to develop a detailed policy agenda, complete with a “100 Day Playbook.” They are building databases of potential staffers, looking beyond just the Beltway and offering training to “prospective presidential employees at all levels.”

“We're really looking past Biden, and preparing well in advance,” Dans told RCP. “We are bringing together a large number of our peer groups to distill out core conservative promises for 2024, so we will have a deep consensus on issues across our sphere.”

Not only will that allow time to plan, he added, it will shape the candidates. The project will serve as a benchmark for the potentially crowded 2024 field, sending detailed signals “that this is what conservatives want in their president, and candidates can work from there.”

The project will be informed by what conservatives see as previous victories, but it won’t be tailored to any one candidate. It will be ready-made and general enough for any conservative who walks through the doors of the West Wing. “Whomever is the next President of the United States, and we're expecting him or her to be very friendly to conservatism,” Roberts said, “will have a playbook that is both for the short-term and the long-term.”

Asked if the effort was about loyalty to conservative principle rather than loyalty tailored to help any particular candidate, Roberts replied, “That is absolutely right.”

Arguments over orthodoxy or political tactics often splinter the right, but Roberts’ effort aims to gather both emerging and established conservative constellations. The 21 major organizations who have already joined are:

“All of us at CPI are honored to help lead this vital project,” Conservative Partnership Institute Chairman Jim DeMint said in a statement. “Personnel is policy, and we must work to ensure the next president is equipped by the smart, tenacious conservative policy staff who have the skills and determination to get things done.”

“As we stand at the cusp of a post-Roe America, we look forward to shaping the policies that will save lives and serve women and families in our nation’s bright pro-life future,” said Marjorie Dannenfelser, president of Susan B. Anthony Pro-Life America.

Republicans feel increasingly bullish about their chances, not just of retaking control of Congress this November, but of making Biden a one-term president. For the conservative coalition, more than just partisan control is at stake. “We're bringing together some of the best minds,” Dans concluded, “basically to solve what we think are existential problems for our country.”