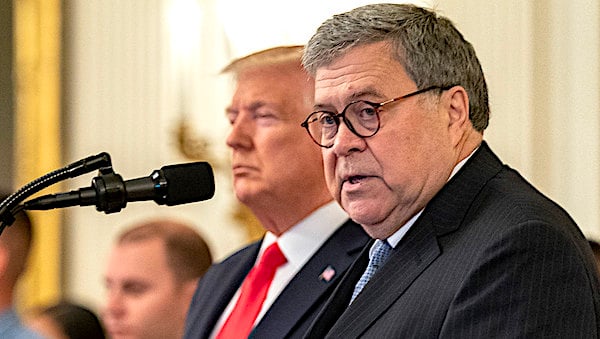 In recent years, students have been told they can't read their Bible at school, cannot talk to peers about their beliefs and certainly cannot pray there.

Critical Race Theory is taught as truth, yet boys are sent to girls restrooms if they claim to be female.

Christian student clubs routinely are denied the right to exist, and just this week, the Supreme Court took a step in the other direction by declaring that a Christian football coach, Joe Kennedy, was wrongly punished and fired for a brief prayer on the field after games played by his football team.

So bad, in fact, he said, the antipathy likely is putting schools in the public education system outside the protections of the Constitution.

According to a report in Just the News, Barr recently spoke at Christian conference in Chicago, explaining that the "crisis" facing Western civilization is the deepest since the days of Christ.

He previously has suggested public schools are so hostile to the Judeo-Christian traditional that the system likely is outside the Constitution's protections.

"We are going through a fateful crisis in Western civilization. This is the deepest crisis we’ve faced in my mind since Christ. That’s because our whole civilization is based on the Judeo-Christian tradition and that tradition is under sustained attack by increasingly militant secular forces," Barr said.

In a report at The Federalist, executive editor Joy Pullmann explained Barr's concerns reprised his comments during a 2019 speech at Notre Dame.

Then, "Barr told the audience U.S. public schools have become hostile to traditional religion while wresting control of American children’s upbringing from their parents. This is a threat to the entire Western order, Barr said, because the unique American system of self-government cannot exist without a citizenry that is committed to traditional religion."

Barr explained there are only two ways to restrain people from following "disordered" behavior, internal restraints which come of sources like biblical morality, and external restraints, or government-imposed laws.

That "self-restraint" is needed when there's a limited government, he said, and it comes from religious devotion.

The problem now, he explained, is that religious faith is under systematic assault from leftists, a group Barr called the "atheocracy."

"The threat today is not that religious people are about to establish a theocracy in the United States, it is that militant secularists are trying to establish an atheocracy," he said.

On Saturday, he said such attacks on faith likely have put school's in violation of the Constitution's ban on government establishment of one religion over another.

"What we’re living through is not a situation where religion is intruding into the government’s rightful arena, it’s exactly the opposite: It’s that government and politics is usurping the role of religion," the former attorney general said.

He said the bottom line is that the leftists across the country insist the material world is all there is, "which makes one's god the self," the report said.

That's in conflict with the traditional beliefs of God.

The report explained leftists are drawn to a utopianism, and in their quest for a form of nirvana on earth, through political power, they must destroy anything that contradicts their agenda, such as faith.

Pullmann explained, "Once you adopt this view, then your political opponents aren’t just disagreeing with you, they’re evil. They are standing in the way of the salvation of mankind."

She wrote, "Because the U.S. Supreme Court and other American political institutions have turned public schools from essentially Christian schools into essentially anti-Christian schools, Barr said, the U.S. school system has been erasing the faith required to sustain limited government."

"Personal and civic moral systems don’t just sort of hover in the air," Barr said. "They have to rest on an explanatory foundation, a metaphysical foundation. When people tell you to do something, you ask ‘Why?’ Why is it necessary to be good and what is it that consists of being good? So the extent to which an education seeks to contribute to a student’s moral formation, it necessarily invades the space of religion when explaining what the moral values are and how they should be inherited."

He said one part of the solution should be to end governmental monopoly over education – and a full repertoire of school choice should be available.