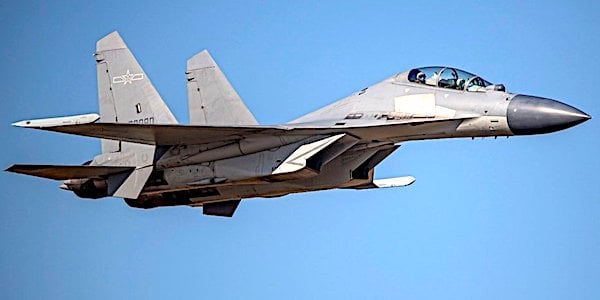 A Chinese fighter jet reportedly intercepted an Australian surveillance plane and released metal shards into the plane’s engine, according to Australia’s Ministry of Defense Monday.

A Chinese J-16 fighter jet purportedly released flares and “cut across the nose” of an Australian P-8 maritime surveillance aircraft while it was conducting routine surveillance in the South China Sea region on May 26, 2022, according to statements made by Richard Marles, Australia’s minister of Defense. The Chinese fighter then reportedly released a “bundle of chaff” containing small pieces of aluminum which were sucked into the P-8’s engine, Marles said.

“The crew of the P-8 responded professionally, and in a manner which would make us all feel proud, they returned the aircraft to its base,” Marles said.

However, Marles declined to identify where in the South China Sea the incident occurred when asked by a journalist.

“I’m not going to answer that. I do know the answer to that, but we will keep that outside the public domain,” said Marles. “It was though in the South China Sea region.”

Chinese-state run media outlet, Global Times, published an editorial on Monday challenging the Australian defense minister’s statements. Without directly contradicting any of Marles’ statements, the Global Times editorial asked about the exact location of the incident and asked what the Australian P-8 was doing just prior to the arrival of the Chinese J-16 fighter jet, according to a Daily Caller News Foundation translation.

The Chinese Embassy referred TheDCNF to statements made by Zhao Lijian, China’s deputy director of Foreign Affairs, during a press conference in Beijing on Monday.

“China will never allow any country to violate China’s sovereignty and security or undermine peace and stability in the South China Sea under the pretext of freedom of navigation,” Zhao said. “China once again urges the Australian side to earnestly respect China’s national security interests and major concerns, and be cautious in words and actions to avoid miscalculation and serious consequences.”

The Department of Defense, Australian Embassy and Global Times did not respond immediately to TheDCNF’s request for comment.