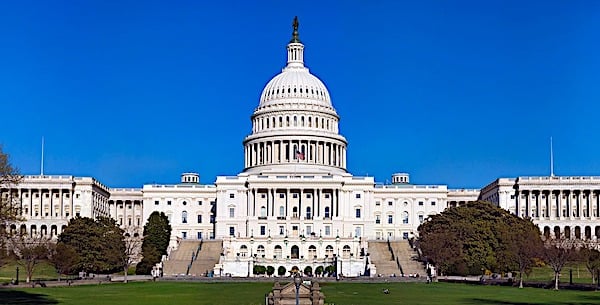 Democrats in Congress have announced their plans to push the divisions in American society even deeper, with a transgender "Bill of Rights" that creates provisions in the law for people based on their sexual orientation or gender identity.

The Hill reports Democrats want to build into federal statutes the Supreme Court's 2020 decision in Bostock that protects gay or transgender workers from on-the-job discrimination. Their bill would further divide those who are tolerant of another's lifestyle but don't wish to support it, and those who insisted that everyone must be "affirming."

The Bostock decision, reviled by conservatives, ordered that a funeral home management had to accommodate a man dressing as a woman while meeting with potential clients and providing company services to grieving families.

The Hill said the proposed law would amend the Civil Rights Act of 1964 to directly protect gender identity and sexual orientation characteristics, alongside skin color and race, mandate "gender-affirming care," which could force doctors and nurses of faith to violate their beliefs by performing body mutilations on children, and more.

It also would directly confront the First Amendment's freedom of speech by banning speech by those who would counsel people with unwanted same-sex attractions against acting on those.

According to the Hill, Rep. Pramila Jayapal, D-Wash., the head of the Congressional Progressive Caucus and part of the Transgender Equality Task Force, said the goal is "full, happy lives" for transgenders, even though studies repeatedly have indicated a suicide attempt rate among that population many times the rate for the full population.

"As we witness Republicans and an extremist Supreme Court attack and roll back the fundamental rights of trans people across our country, and as state legislatures across the country target our trans community with hateful, bigoted and transphobic attacks, we are standing up and saying enough is enough," she claimed.

There are dozens of co-sponsors.

They cited the Supreme Court's decision that returned oversight of America's lucrative abortion industry back to the states, where it was before the faulty 1973 Roe v. Wade decision, in their arguments.

Justice Clarence Thomas, in fact, said because other court rulings, such as same-sex marriage, may have been based on the same faulty assumptions found in Roe, they should be revisited.

"While some politicians are targeting our community with discriminatory legislation, we are grateful that the members House of Representatives are sending this message to us — and especially to transgender youth — that they affirm our lives and value the contributions we make to our country," said Rodrigo Heng-Lehtinen, the National Center for Transgender Equality’s executive director. "We deserve to live as who we are without sacrificing our safety, access to health care or enduring violence and discrimination."

WND reported in 2020 when James Dobson, the founder of the James Dobson Family Institute and the host of the "Family Talk" radio program, described Joe Biden's advocacy for transgenderism as "lunacy."

That was when Biden was a candidate, and openly supported the idea of a little boy becoming a little girl.

WND reported, ironically, that the Bostock decision granting employment protections to individuals based on their sexual proclivity assumed that when the Civil Rights law was adopted in 1964, members of Congress specifically did not intend to protect only individuals based on being male or female, but also intended to include transgenders in their protections.

In that ruling, Justice Samuel Alito predicted the LGBT activists would weaponize it against conservatives across American, and it took only months for that to become reality.

USA Today assembled a list of additional cases that already have surfaced.

Alito said, "The document that the court releases is in the form of a judicial opinion interpreting a statute, but that is deceptive. Title VII of the Civil Rights Act of 1964 prohibits employment discrimination on any of five specified grounds: 'race, color, religion, sex, [and] national origin.' … Neither 'sexual orientation nor 'gender identity' appears on that list. For the past 45 years, bills have been introduced in Congress to add 'sexual orientation' to the list, and in recent years, bill have included 'gender identity' as well. But to date, none has passed."

Alito warned the "entire federal judiciary" will end up "mired for years" in the fallout.

"We’re using Bostock everywhere, just about, in all these other contexts – education, health care, housing," James Esseks of the American Civil Liberties Union told USA Today at the time. In fact, Alito warned 167 different federal laws could be affected by the precedent that was set.

The Supreme Court had been warned about its science-defying decision, with: "Differences exist between males and females at conception at the biochemical and cellular levels, and result directly from the defining genotypic difference between male and female mammals. An XY (male) sex chromosome constitution versus an XX (female) sex chromosome constitution. Every cell of a male is male, and every cell of a female is female."