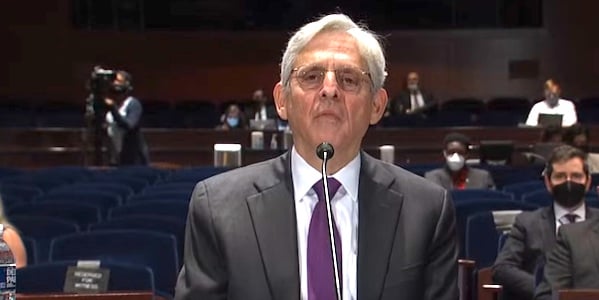 The "Stasi agents" of the U.S. Department of Justice, directed under Joe Biden by Merrick Garland, have been accused of issuing a "direct threat against the judiciary."

The condemnation comes from Mike Cernovich, a media personality and political commentator who posted on social media: "DOJ does not issue statements like these disagreeing with Supreme Court rulings. It doesn't happen. It has no lawful basis. This can only be seen as a direct threat against the judiciary by Stasi agents."

DOJ does not issue statements like these disagreeing with Supreme Court rulings. It doesn’t happen. It has no lawful basis.

This can only be seen as a direct threat against the judiciary by Stasi agents. pic.twitter.com/JcJMBedpRX

The statement from DOJ, in fact, condemned the high court's decision to strike a New York state demand that people who want to carry weapons in the state provide a valid reason that they want to defend themselves.

The Supreme Court said other constitutional rights are not conditioned by proving to a bureaucrat that one deserves to be able to use them.

"We respectfully disagree with the court's conclusion that the Second Amendment forbids New York's reasonable requirement that individuals seeking to carry a concealed handgun must show that they need to do so for self-defense. The Department of Justice remains committed to saving innocent lives by enforcing and defending federal firearms laws, partnering with state, local and tribal authorities and using all legally available tools to tackle the epidemic of gun violence plaguing our communities."

The high court's decision noted that it was not so much an established standard that New York imposed that offended, but that people were required to submit to a bureaucrat, who could rule against them for any reason, including personal.

And the New York law proved less than effective, as one of the recent mass shootings that has triggered leftist hysteria across the nation happened in Buffalo.

John Daniel Davidson, senior editor at The Federalist whose work has appeared in the Wall Street Journal, the New York Post and elsewhere, noted the circumstances suggest that Garland's DOJ is "a threat to the republic."

Online, he said that statement, plus recent federal raids on private homes, "underscore the weaponization of the DOJ under Garland."

"It’s become painfully obvious over the past year that the Justice Department under Attorney General Merrick Garland has been weaponized and politicized to the point that it represents an active threat to the rule of law and the separation of powers. It’s not too much to say that Garland’s DOJ has become a threat to the republic," he warned.

On the gun ruling, Davidson noted that the decision was "a great victory for the Constitution and a long-overdue vindication of New Yorkers’ Second Amendment rights."

In fact, it "forced New Yorkers to prove to a municipal bureaucrat that they needed a gun for self-defense. In practice, this made it almost impossible for law-abiding citizens in New York to exercise their constitutional right to bear arms."

But since the law did not implicate federal laws at all, "Only an utterly politicized Justice Department hoping to undermine the Supreme Court’s constitutional authority and sow the seeds of nullification would issue such a statement," he said.

Worse yet was the DOJ's raid of the home of Jeffrey Clark, formerly of the DOJ.

"Why? Because Clark had the temerity to investigate claims of voter fraud during the 2020 election," he wrote. "That made Clark a target for the House Democrats’ Jan. 6 committee, whose Soviet-style show trial spent a good deal of time Wednesday implying that Clark, who once oversaw 1,400 lawyers and two divisions at DOJ, is traitor who tried to overturn the results of the election."

"His crime, according to the Justice Department and the Jan. 6 committee, was signing a document with five other Nevada Republican Party electors after the 2020 election signaling their support for Trump," Davidson found.

Previous evidence of Garland's decision to make the DOJ a political weapon included his raid on Project Veritas founder James O'Keefe's home, months of illegal spying on that group, and more.

"Even worse, in some ways, was the unprecedented memo in October designed to threaten and silence parents whose only 'crime' was to speak out about the teaching of critical race theory in schools," he explained.

Those concerned citizens, he said, "Garland smeared them as 'domestic terrorists'" in directing the DOJ and FBI to take action against them.

Davidson explained, "At every turn, Garland has shown himself hostile to the Bill of Rights and to law-abiding Americans who exercise those rights, and beholden to Democrat partisans and left-wing advocacy groups. He has brazenly allowed political influence to direct the Justice Department’s considerable powers.

"If you think Garland’s DOJ isn’t a threat to the republic, then you need to start paying attention, because the weaponization of federal law enforcement under Biden and Garland is almost certainly going to get much worse."