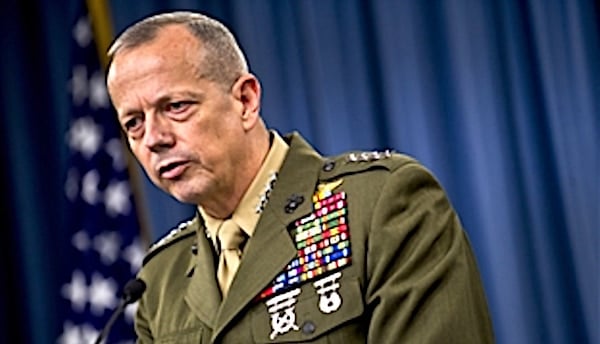 Marine Corps Gen. John R. Allen, commander of U.S. and international forces in Afghanistan, briefs the media at the Pentagon, May 23, 2012. (U.S. Department of Defense photo)

Retired Gen. John R. Allen announced his resignation as president of the Brookings Institution, a left-leaning think tank, on Sunday after news broke of an ongoing FBI investigation into his foreign lobbying activity.

The FBI accused Allen of illegally failing to register as a foreign agent while lobbying on behalf of the Government of Qatar, beginning the investigation as early as April. Allen allegedly advised Qatari officials on how to obtain U.S. support after the U.S. identified Qatar as supporting terrorist organizations in 2017, the same year Allen became president of the Brookings Institution, according to court documents.

“While I leave the institution with a heavy heart, I know it is best for all concerned in this moment … I wish the Board and every member of the Brookings family the very best in the challenging days ahead,” Allen wrote in his resignation letter, dated June 12. Nowhere did Allen mention the reason for his decision to step down.

The FBI applied for a warrant to search Allen’s iCloud data for evidence he violated the Foreign Agents Registration Act (FARA) in April, the Associated Press reported on June 8. FARA requires individuals acting in the interests of foreign governments to publicly disclose the nature of their relationship with the government.

Allen willfully deceived stakeholders of his lobbying activity, including receiving $20,000 a month in compensation from the Qatari government, according to the warrant. He allegedly cooperated with Richard Olson, former ambassador to Pakistan under President Barack Obama, who faced charges in April of illegally lobbying for Qatar.

The Brookings Institution placed Allen on leave from his former post as the organization’s president on that same day the warrant became public, the Associated Press reported.

“We want to thank John for his contributions to Brookings, including his leadership in successfully guiding the institution during the pandemic, as well as his many years of service and sacrifice for our country,” the Brookings Institution said in a statement after Allen resigned.

“The integrity and objectivity of Brookings’s scholarship constitute the institutions principal assets and Brookings seeks to maintain high ethical standards in all its operations. Our policies on research independence and integrity reflect these values.”

The Brookings Institution has come under scrutiny in the past for its ties with Qatar, which had given $14.8 million to the think tank over four years in 2014. Academics reported a taboo against criticizing the Qatari government.

The Brookings Institution and Allen did not immediately respond to the Daily Caller News Foundation’s requests for comments.