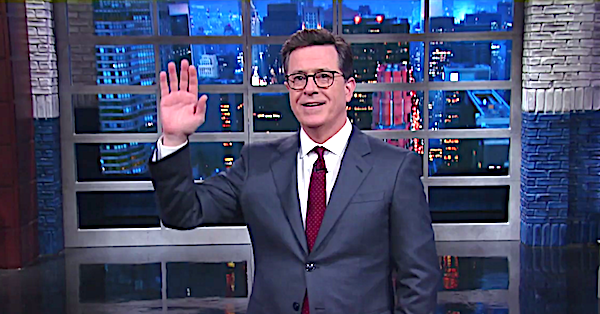 Hundreds of protesters were arrested for being in the U.S. Capitol on Jan. 6, 2021, without authorization. Democrats have claimed their actions were an attempt to overturn the government of the United States, and many of the apparent trespassers remain in jail – more than a year after the fact – on what ordinarily would be considered minor charges.

Now a team of employees of leftist entertainer Stephen Colbert have been caught in the same predicament – being in the Capitol without authorization.

And GOP members of Congress are insisting that Capitol police provide them with all the reports, witness statements, surveillance footage and photographs concerning the arrests.

"These individuals were arrested and charged with unlawful entry after causing 'disturbances' at the offices of several Republican members, including 'banging' on their office doors," the letter to the police agency from Reps. Jim Jordan, R-Ohio, and Rodney Davis, R-Ill., said.

The problem developed with the actions from a group of staff members from "The Late Show with Stephen Colbert."

The GOP letter also called out Rep. Adam Schiff, a Democrat who has become famous for claiming for years he saw evidence of "collusion" in that famously now-debunked Russia collusion conspiracy theory Democrats launched against President Trump.

The Republicans charge the TV show faction reportedly gained access to the building through Schiff, a member of the House Select Committee to Investigate January 6, and Rep. Jackie Auchinloss.

CBS officials said the crew was at the Capitol for authorized interviews with members of Congress.

However, Fox News said the crew members were arrested about 8:30 p.m. last Thursday in the Longworth House Office Building and charged with unlawful entry.

The report said they had, earlier in the day, done interviews with members of the Jan. 6 Select Committee, including Schiff, Rep. Stephanie Murphy, D-Fla, and Auchincloss, D-Mass.

But they didn't have the proper press credentials and were removed from the building.

Then later, Fox reported, citing sources, "An aide to Auchincloss let them back into the House office buildings around 4:00 p.m. and they were left unattended for several hours."

Eventually they were discovered, recording comedy skits, near the office of Rep. Lauren Boebert, R-Colo.

The Washington Times said the GOP members pointed out the earlier cases.

"Much has been made lately about unauthorized access to House office buildings, including debunked Democrat allegations that Republican members led so-called reconnaissance tours of the Capitol Complex in advance of January 6," the letter said.

"Unlike the Democrat allegations of reconnaissance tours, however, the events on June 16 actually resulted in arrests for unlawful entry," the Republicans wrote.

The Times reported, "Those arrested and charged include Robert Smigel, the comedian behind the cigar-chomping dog puppet Triumph the Insult Comic Dog, who appears regularly on Mr. Colbert’s show."

Police said the actions by the television-show workers remain under an "active criminal investigation, and may result in additional criminal charges after consultation with the U.S. Attorney."

According to MSN, Colbert said his team had been invited into the building, and were doing "last-minute puppetry" when they were found by police.