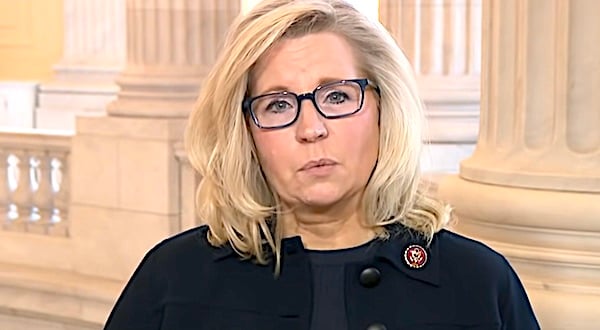 Rep. Liz Cheney of Wyoming, the GOP member who turned on President Trump to become his enemy, possibly because he criticized her father, is turning to Democrats to try to stay in office.

Cheney voted for one of House Speaker Nancy Pelosi's failed impeach-and-remove campaigns against Trump. She took the job as second-in-command of Pelosi's January 6 "investigation" commission, and got booted from her national GOP leadership post for it.

Republicans in Wyoming also rejected her, and a primary challenger was recruited.

Now, coming up for election in just months, Cheney is finding herself behind by double-digit percentages in many polls.

And without Republicans to whom she can appeal for help, she's going to Democrats in the GOP-majority state.

The Gateway Pundit is reporting that Cheney is mailing campaign brochures to Wyoming Democrats with instructions "on how to switch parties to be able to voter for her in the state’s closed August 16 Republican primary."

The report noted Trump-endorsed challenger Harriet Hageman is leading in the race by 56% to about 26%.

Cheney's flyers started showing up just days ago, and Democrats are not amused.

"Cheney sent a mailer out blatantly asking folks to switch parties for the primary. Whatever you think about the 1/6 committee, remember THEY made the party what it is. THEY made Trump possible. We have 3 very different Dems vying for the House. Vote in OUR primary, not theirs," one county party stated.

HOW DO I CHANGE MY PARTY AFFILIATION TO REGISTER AS A REPUBLICAN SO I CAN VOTE FOR LIZ?
To change your party affiliation or to declare a new affiliation, complete the Wyoming Voter Registration Application & Change Form and submit it to your county clerk’s office not later than 14 days before the primary election. You may also change your party affiliation at your polling place on the day of the primary or general election, or when requesting an absentee ballot.

The report noted that Reid Epstein of the New York Times had talked with Cheney earlier about this exact move.

He reported, "In February, Cheney told me she would not make a concerted effort to reach out to Democrats asking them to change parties."