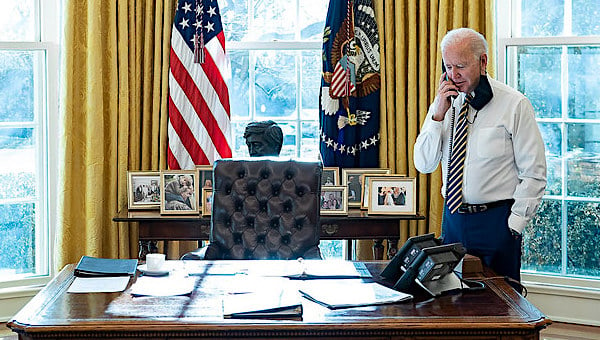 Media reports reveal that the president of Mexico will be meeting with Joe Biden in Washington a few weeks from now, in order to lobby him for the idea of a superstate "America," that would encompass the Western Hemisphere.

"Submerging the U.S. in a hemispheric superstate – that sounds like the sort of plan Biden and company will like!" explained a report at Vdare.com.

"In July I'm going to see him [Biden] in the White House and I want to talk to him about the integration of all America [the Western Hemisphere]. My proposal is that, as the European Community was created and later became the European Union, we need to do the same in America."

He continued, "But this means a change in policy, leaving behind confrontation, hate, threats, embargoes, meddling and instead choose brotherhood, for the Good Neighbor Policy."

The Gateway Pundit report noted the agenda comes on the heels of Obrador's decision to skip the recent Summit of the Americas conference in the U.S.

The Pundit commented that Obrador wants to push for the integration of all the Western Hemisphere into one community similar to the European Union.

"That way all citizens will be able to freely travel between the failed states, the s--------, the developing nations and the United States and Canada," the article commented. "You know that since this further weakens the U.S., Joe Biden and his handlers will be all over this."

Obrador's decision against attending the Americas summit was later described by American politicians as blackmail.

At the Statesman, a report explained Sen. Bob Menendez, a Democrat and chief of the Senate Foreign Relations Committee, said Obrador was siding with "dictators and despots" for insisting that Biden invite Cuba, Venezuela and Nicaragua.

Lacking that invitation, Obrador said, he would skip the meeting too.

"I think that President López Obrador basically tried to blackmail President Biden into insisting that countries that are not democratic – countries like Venezuela, Cuba, Daniel Ortegas’ Nicaragua, that are dictators and despots – should have been invited to the summit,” Menendez told MSNBC.