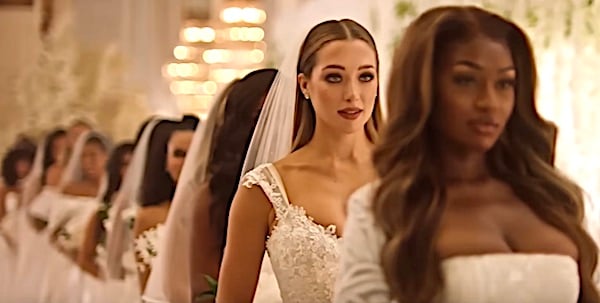 (YNET NEWS) -- As part of the surprise drop for his new album “Honestly, Nevermind,” Canadian Jewish musician Drake released a music video for his new song, “Falling Back,” that features him as the groom in a wedding officiated by an Orthodox rabbi in a black hat.

There’s nothing orthodox (or safe for work) about the wedding itself, though, which features 23 brides.

That punchline isn’t revealed until a few minutes into the video, when the rabbi officiating the wedding ceremony, which takes place under a white floral chuppah, asks the bride, “Do you commit yourself to being a good wife, according to our values and traditions?”

WND News Services
These reports are produced by another news agency, and the editors of WND believe you'll find it of interest.
Thieves crash car into luxury store in Beverly Hills, flee before police arrive
'Incendiary rhetoric': CNN has hissy fit over criticism of FBI
Not a joke: Look who says Americans should 'absolutely' trust FBI after Trump raid
Whitmer rakes in cash from Hollywood, billionaires while blasting others' 'special interests'
Biden's CIA director employed Chinese Communists at elite think tank
See more...