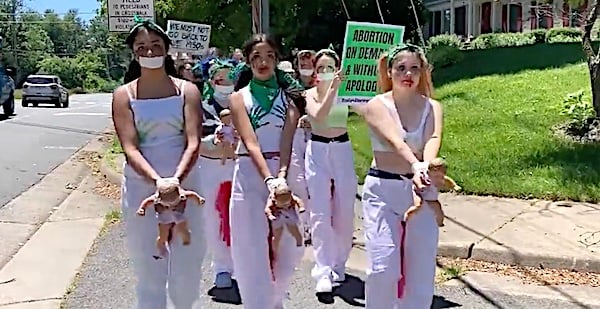 Amid threats of violence and controversial demonstrations at the homes of justices, the Supreme Court is expected to issue at least one ruling Tuesday, including the abortion case that would overrule the 1973 Roe v. Wade decision if the leaker majority opinion holds.

In the leaked draft opinion, which was confirmed by Chief Justice John Roberts to be authentic, Associate Justice Samuel Alito wrote for a 5-4 majority that Roe "was egregiously wrong from the start."

However, Roberts has said that the draft – which circulated in February and was reported May 2 by Politico – may not be the court's final decision.

The overturn of Roe would not ban abortion. Prior to the 1973 ruling, each state determined the legal status of the procedure. At least 26 states are likely to restrict abortion, according to the pro-abortion Guttmacher Institute, including 22 with anti-abortion laws that would be reinstated or triggered as soon as Roe falls.

Metal barriers were erected in front of the Supreme Court building the day after the leak was made public. Demonstrations have taken place since then outside the court and at the homes of five conservative justices, particularly Justice Brett Kavanaugh and Amy Coney Barrett. Two weeks ago, a man who traveled from California man faces an attempted murder charges after he was found outside Kavanaugh’s house with a gun, pepper spray and other weapons.

Pro-abortion activists dressed in blood-soaked outfits and brandishing dolls held a protest outside the home of Supreme Court Justice Amy Coney Barrett on Saturday as the court is poised to overturn #RoeVWade in the coming weeks.

These people are crazy! pic.twitter.com/YhYlHr9dtW

Meanwhile, the anarchist group Jane's Revenge is planning a "Night of Rage" if the Supreme Court overturns Roe. Activists are urged to "hit the streets" and "riot." The group warns: "To our oppressors: If abortions aren't safe, you're not either."

Last Wednesday, more than 120 members of Congress demanded that Attorney General Merrick Garland take action on Jane's Revenge, listing 14 attacks since the majority-opinion leak. In a letter Friday to Garland, William Donahue of the Catholic League for Religious and Civil Rights asked for the "full resources of the Department of Justice to apprehend and prosecute domestic terrorists who have recently attacked Catholic individuals, vandalized Catholic churches and torched Catholic-operated crisis pregnancy centers."

President Biden signed a bill Thursday that will give 24-hour security protection to the families of Supreme Court justices.

The White House has refused to condemn or take action against the protests, and some legal analysts have insisted that the law does not ban people from marching past a justice's home.

ACLU attorney Vera Eidelman argues that banning that kind of protest "would unconstitutionally limit people's ability to protest in traditional public forums, including streets and sidewalks, and it would restrict our ability to communicate our messages of dissent, disgust, and disappointment to the public."

She contends the 1950 statute would be violated only by "[t]argeted, stationary protest, solely and directly in front of a justice's home, with the intention of influencing that justice’s opinion on a vote."

Constitutional scholar Jonathan Turkey has criticized Biden and Garland for not condemning the home protests. But he believes the use of the 1950 law "to arrest protesters would be a serious blow to free speech and would be difficult to defend in the courts."

'We've heard enough of the extremists'
Immediately after the leak of the draft majority opinion, a visibly angry Sen. Elizabeth Warren vowed to "fight back."

"They have been out there plotting, carefully cultivating these Supreme Court justices," she said of Republicans in a walking interview, "so they could have a majority on the bench who could accomplish something that the majority of Americans do not want."

The paper said the administration would use an emergency declaration to ensure that physicians who carry out abortions in states where they are not licensed are shielded from legal liability. Another proposal is that physicians in states that ban abortion conduct the deadly procedure on federal land, such as military bases.

At a news conference last week, Sen. Patty Murray, D-Wash., expressed dissatisfaction with the administration's preparation for the impending ruling.

"We need the Biden administration to step up to the plate and do everything it possibly can to protect the right to abortion," she said.

Murray said the Supreme Court is preparing to release a ruling that will unleash "a tsunami of trigger laws that will create chaos and deny millions of patients the ability to get the care they need."

"We need a plan from this administration as soon as humanly possible," she said.

The Times said the Biden administration is also exploring ways to get around the Hyde Amendment, which prohibits the use of taxpayer to pay for abortions.  The Justice Department's Office of Legal Counsel, the paper reported, is looking at whether federal funds could be used to pay the travel expenses of women seeking an abortion in another state.

"It's just ridiculous in my view, and I don't think the country will stand for it," he said of overturning Roe. "But I think what we’re going to have to do, there's some executive orders I could employ, we believe, we’re looking at that right now," he said.