Allowing citizens to express opinions in the public square that contradict the government-media monopoly's narrative is a "problem for democracy," according to a onetime strategist for former President Barack Obama.

Dan Pfeiffer, Monday on MSNBC's "Morning Joe," was reacting to co-host Joe Scarborough's complaint that Facebook – from which 50% of Americans get their news – is allowing the spread of what he deems to be disinformation on topics such as COVID-19 and the Capitol riot.

"If you go to Facebook on a daily basis, the posts with the most engagement are from Ben Shapiro, Dan Bongino, Candace Owens. It is right-wing content," said Pfeiffer, who was talking about his new book "Battling the Big Lie: How Fox, Facebook, and the MAGA Media Are Destroying America."

The former Obama communications chief said that content from the political right "dwarfs progressive content, dwarfs mainstream media content, which actually should be the part that should scare us the most."

"That is a problem for democracy." 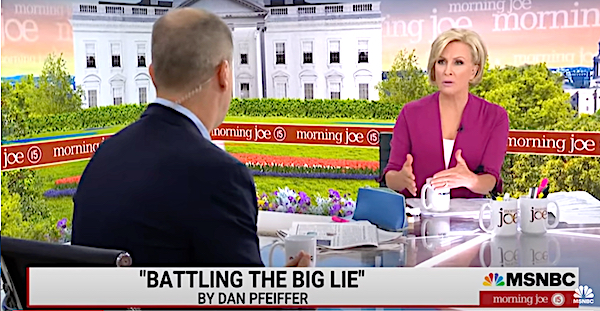 Pfeiffer wasn't the only one in the exchange Monday to somehow miss the connection between governance by the people and free speech. Not to mention the gatekeeping power that establishment media has had over the flow of information for generations.

Scarborough prefaced his question to Pfeiffer with a reference to legendary CBS News anchor Walter Cronkite.

"Time and again these social media companies are behaving in a way that we would never allow any other company to behave," he began. "And by that I mean 50% of Americans get their news from Facebook.

In fact, Cronkite – long before the Internet came along to help democratize the news – is widely believed, as "the most trusted man in America," to have influenced the populace and hence Vietnam War policy when he concluded in a CBS special after a trip to Saigon following the Tet Offensive that the U.S. needed to negotiate a way out of the war. America should negotiate, he said, "not as victors, but as an honorable people who lived up to their pledge to defend democracy, and did the best they could."

Cronkite based that conclusion on the premise that Tet was a stalemate when in fact it was a decisive American victory over the Viet Cong, which suffered 10 times as many casualties. But the communist insurgents and their allies in the north used the gruesome images of the battle broadcast on TV in a successful propaganda campaign.

More than three decades later, another saga involving a CBS News anchor and the Vietnam war had a different outcome, demonstrating the Gutenberg Press-like power of the internet and citizen journalists to bypass the media gatekeepers and prevent them from shaping the course of events. In this case, it was Dan Rather and CBS using bogus documents as the basis of a damning report that would have prevented the reelection of George W. Bush. It was bloggers at home "in their pajamas" that prevented a powerful media institution from altering history.

On Monday, Scarborough – continuing the example of Cronkite as a dominant news source that, in the MSNBC host's mind, nevertheless could be trusted – said that if the news anchor had lied to the American people, the government would have pulled the network's Federal Communications Commission license.

"Why can't we pass basic regulations to make these (social media) companies be more transparent about the algorithms that spread the lies on everything from COVID to January the 6th?" Scarborough asked.

The 'freaks on Facebook'
After Pfeiffer responded with his concern that giving space for voices on the right was a "problem for democracy," the Democratic strategist complained that Republicans in Congress won't do anything about the purported imbalance.

"Are you saying, like, that the Republican agenda is backed up by the freaks on Facebook, and so they don’t want to do anything about it?"

"To be very clear, Facebook is the most powerful messaging platform for the extreme MAGA message," he said. "That benefits the Republicans. They like to cry about Facebook and Big Tech, and then they just laugh their way to the bank pushes their message, including the Big Lie, into people's rooms all across this country."

What, in fact, are the facts?
The MSNBC segment also ignored the fact that it's voices on the right presenting evidence-based alternative views of the government's response to COVID as well as what happened on Jan. 6, 2021, who have been censored.

In its partnership with the "fact-checker" PolitiFact, for example, Facebook censored accounts presenting evidence to support the theory that the pandemic originated in a lab in Wuhan, China. News organizations that rely on Facebook for distribution were forced to comply with PolitiFact's conclusion about the virus' origin or be suspended or banished from the platform.

But the evidence for the lab-leak theory eventually penetrated establishment media. And Dr. Anthony Fauci, who had enough evidence at the beginning of the pandemic to know better, was finally forced to admit publicly that the theory was plausible.

That led to PolitiFact unpublishing its highly influential "fact check," which had declared the lab-leak theory was "ridiculous," worthy of its "Pants on Fire" rating.

And there's an alternative to the establishment "insurrection" narrative on Jan. 6 based on evidence the "mainstream media" has ignored that is worthy of public debate.