The American pastor who was falsely charged by the Turkish regime of terrorism and espionage gave a frank account of his ordeal in a video interview with WND, confessing that his first year in prison "broke" him, to the point of losing his will to live.

"In the midst of my weakness and brokenness I had to learn to stand," he said.

After returning to the United States after 25 years in Turkey, he noticed a dramatic rise in hostility toward Christians that appears only to be increasing. And he warns American followers of Jesus they may not be as prepared as they think they are to face persecution.

"Persecution can make you stronger," he told WND in the interview embedded at the end of this article. "But it can also knock you out." 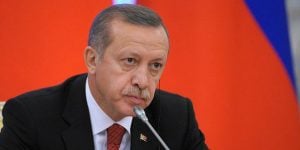 Brunson, ordained in the Evangelical Presbyterian Church denomination, was pastoring Izmir Resurrection Church near the Aegean Sea when the hardline regime of President Recep Tayyip Erdogan targeted him in the wake of the failed 2016 coup. After leveling evidence-free charges, Turkey demanded that Washington, in exchange for Brunson, hand over an exiled Turkish Muslim cleric living in the U.S. accused of masterminding the coup. Along with gaining concessions, the regime clearly wanted to use Brunson's case, the pastor said, to intimidate both foreign and Turkish Christians.

Brunson said he had no idea when his imprisonment would end until the day he was released, fearing at times he would spend the rest of his life there. The Turkish prosecutors, during what U.S. authorities described as a show trial, were pushing for three life sentences, served in solitary confinement with no possibility for parole. He was convicted of terrorism on Oct. 12, 2018, and within 24 hours he was in front of television cameras at the White House with the president of the United States.

Secretary of State Mike Pompeo and Vice President Mike Pence were directly involved in his release, he said, but it was President Trump's leadership and "robust involvement" that made the difference.

"If the (Trump) administration had not taken the steps that they did, I think I would probably still be in Turkey, in prison," Brunson said.

'A crisis with God'
When he was initially incarcerated in October 2016, he was held in solitary confinement. Then, when he was put in the prison system, he was among 22 people confined 24 hours a day in a cell built for eight.

He writes in his book "God's Hostage": "Being locked up behind a big metal door in a foreign country, hearing the keys turn and the bolt slam for the first time is sobering. It's a sudden loss of control and plunge into uncertainty."

His body broke down from the stress, he told WND, and then came "a spiritual crisis – a crisis with God."

"I had expected from reading biographies, from other stories, from my own personal experience with God in the past, that I would have a real sense of strength and joy, and a sense of God's presence," he said.

"And I was surprised when I didn't. ... I experienced what I call the silence of God at that time."

The first year was a time of "breaking physically, emotionally and psychologically and spiritual."

Brunson said he was surprised at how difficult his ordeal was, confessing that at many points he was suicidal.

In the second year, he said, "in the midst of my weakness and brokenness I had to learn to stand."

'A sense of urgency'
Through fresh eyes, he has observed upon his return to his native land a dramatic increase in hostility toward Christians that he believes will only increase.

"I have a sense of urgency in my heart since coming back, about the United States," he said. "I think that what I was through was partly that I could encourage other people who also are going to face challenges, difficulties and pressure because of their faith."

Brunson said there are two "wedge issues" he believes will drive persecution. One is the "exclusivity of Jesus and salvation" and the other is the command of Jesus for obedience regarding the hotly contested issues of sexual morality, gender identity, marriage, family and biblical justice.

God is neither a Republican or a Democrat, Brunson said, but he has a "side" on these crucial issues.

"I need to make sure I'm getting on his side," Brunson said.

Followers of Jesus in this culture, he said, face marginalization, "cancellation" and in some instances the loss of a job.

And he talked about the temptation pastors have to shy away from the hot-button issues for fear of splitting their congregations.

There's much more heat to come, he believes. And from his experience, he advises that any preparation should be focused on "preparation of the heart" and the formation of close relationships with like-minded people.

He warned against a "bravado" toward persecution, to which he once was prone. And against a "misplaced trust" in hope for a political reversal, as important as that is in "carving out space for liberty so that other institutions, that believers, that Christians, are able to flourish."

"The political is very important," he said. "But every institution in our culture is under the leadership of people who are hostile to our faith."

'The terror priest'
Brunson has filmed an eight-part video series on the lessons he learned in prison called "Prepared to Stand" that is available on the website of the Family Research Council.

The series concludes with a conversation with his wife, Norine, who was imprisoned at the same time and released after two weeks.

Brunson speaks movingly of the profound impact of his wife, who chose – against the counsel of some respected advisers – to remain in Turkey and visit him in prison every day. Meanwhile, Turkish television and other media were regularly portraying her husband as a CIA agent who was fomenting insurrection, "the spy priest, the dark priest, the agent priest, the terror priest."

Brunson told WND he has a picture in his mind of Norine as she defied the shame showered on him and the intimidation of the prison – the guards with machine guns, the razor wire and the high tech security.

"But she would come to the prison with the mindset 'I am a daughter of the king, and I'm here to see a son of the king.' And then she would lift her head up high and walk in with that mentality," Brunson said.

"I just love that picture of her, in my mind. She's just a very courageous woman."

Norine, at times, he said, had the role of pastor, ministering to him at his moments of deep despair.

"I'm confused, I have questions, I have no one who can answer my doubts," he said. "She would come in and bring truth to me. Speak truth to me. Give me encouragement that would get me through to the next time."

Sometimes she would need to be firm.

"One thing she said to me at one point – I was very weak – and she said, 'Andrew, you just need to go back to your cell and repeat this: 'Andrew, in Christ, chooses life.'"